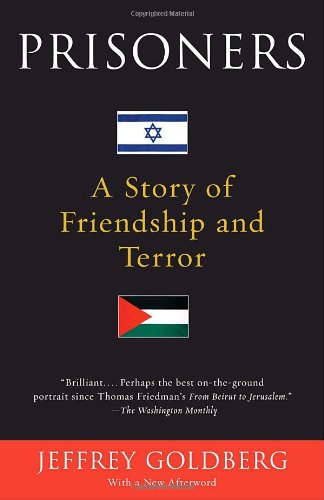 Brooklyn-born former Israeli army prison guard Jeffrey Goldberg has been named editor of The Atlantic, capping a memorable journalistic career of succeeding by failing. Goldberg is one of the many advocates of the U.S. Iraq Attaq of 2003 whose careers haven’t been hurt at all by helping plunge his country (or co-country) into an utterly unnecessary foreign policy catastrophe.

Should the U.S. Invade Iraq? Week 2

David Plotz [future editor of Slate] has offered a not-unconvincing argument for Saddam’s removal, but let me offer a better one: aflatoxin.

In 1995, the government of Saddam Hussein admitted to United Nations weapons inspectors that its scientists had weaponized a biological agent called aflatoxin. …

I do not want, in this space, to rehearse the arguments for invasion; Jacob Weisberg [editor of Slate from 2002 to 2008] and Anne Applebaum [future Washington Post columnist] have done a better job of that than I could, and they have also explained why multilateralism and congressional sanction are not the highest moral values known to man. There is not sufficient space, as well, for me to refute some of the arguments made in Slate over the past week against intervention, arguments made, I have noticed, by people with limited experience in the Middle East (Their lack of experience causes them to reach the naive conclusion that an invasion of Iraq will cause America to be loathed in the Middle East, rather than respected).

How’s that working out anyway? I hear ISIS respects us rather than loathes us. It wouldn’t be a big deal to me except ISIS’s followers in the United States keep shooting and chopping up Americans. Unlike Editor Goldberg, I don’t have a co-country. So I take it personally when my fellow Americans get slaughtered due to the conventional wisdom of Invade the World / Invite the World.

I will try, instead, to return to the essential issues: the moral challenge posed by the deeds of the Iraqi regime; and the particular dangers the regime poses to America and its allies. Everything else, to my mind, is commentary

The Rest of ‘The Rest Is Commentary’

In the September 10 issue of The New York Times, the well-known journalist Jeffrey Goldberg (whose career got its start in these pages) published a long and grim op-ed column about the dangers of a terrorist nuclear attack on American soil. Compared with such a prospect, he wrote, “Everything else — Fannie Mae, health care reform, energy independence, the budget shortfall in Wasilla, Alaska — is commentary.”

The phrase “everything else is commentary,” or, as it is more frequently encountered, “the rest is commentary,” has in recent years become such a part of the English language that many people are unaware of its Jewish roots.

Back to Goldberg in Slate in 2002 on why America must invade Iraq:

There are, of course, many repugnant dictators in the world; a dozen or so in the Middle East alone. But Saddam Hussein is a figure of singular repugnance, and singular danger. To review: There is no dictator in power anywhere in the world who has, so far in his career, invaded two neighboring countries; fired ballistic missiles at the civilians of two other neighboring countries; tried to have assassinated an ex-president of the United States; harbored al-Qaida fugitives (this is, by the way, beyond doubt, despite David Plotz’s assertion to the contrary); attacked civilians with chemical weapons; attacked the soldiers of an enemy country with chemical weapons; conducted biological weapons experiments on human subjects; committed genocide; and then there is, of course, the matter of the weaponized aflatoxin, a tool of mass murder and nothing else.

I do not know how any thinking person could believe that Saddam Hussein is a run-of-the-mill dictator. No one else comes close—not the mullahs in Iran, not the Burmese SLORC, not the North Koreans—to matching his extraordinary and variegated record of malevolence.

And the romance novels Saddam was writing at the time were particularly self-indulgent in prose style. The very future of literature demanded that America invade Iraq.

Earlier this year, while traveling across northern Iraq, I interviewed more than 100 survivors of Saddam’s campaign of chemical genocide. I will not recite the statistics, or recount the horror stories here, except to say that I met enough barren and cancer-ridden women in Iraqi Kurdistan to last me several lifetimes.

So: Saddam Hussein is uniquely evil, the only ruler in power today—and the first one since Hitler—to commit chemical genocide. Is that enough of a reason to remove him from power? I would say yes, if “never again” is in fact actually to mean “never again.”

But at a panel this past weekend on Iraq held as part of the New Yorker festival, Richard Holbrooke scolded me for making the suggestion that genocide was reason enough for the international community to act against Saddam. Holbrooke, who favors regime change [Holbrooke was Hillary's lead foreign policy advisor in 2008 and her favorite for Secretary of State], said the best practical argument for Saddam’s removal is the danger posed by his weapons programs.

… There is consensus belief now that Saddam could have an atomic bomb within months of acquiring fissile material. This is not unlikely, since the international community, despite Kate Taylor’s assertion

I have no idea who Kate Taylor is. She obviously must have been some loser who was skeptical of the Iraq Attaq and thus has never been heard from again.

, is incapable in the long run of stopping a determined and wealthy dictator from acquiring the things he needs. It is believed now that Saddam’s scientists could make the fuel he needs in as little as three years …

The argument by opponents of invasion that Saddam poses no “imminent threat” (they never actually define “imminent,” of course) strikes me as particularly foolhardy. If you believe he is trying to acquire an atomic bomb, and if you believe that he is a monstrous person, than why would you possibly advocate waiting until the last possible second to disarm him? …

The administration is planning today to launch what many people would undoubtedly call a short-sighted and inexcusable act of aggression. In five years, however, I believe that the coming invasion of Iraq will be remembered as an act of profound morality.

—Jeffrey Goldberg is a staff writer at The New Yorker and a frequent contributor to Slate.

Jeffrey Goldberg is a national correspondent for the Atlantic and the author of Prisoners: A Story of Friendship and Terror.

Eleven days later, physicist Gregory Cochran’s email on why Saddam couldn’t be going nuclear was posted on Jerry Pournelle’s blog. But who has ever heard of that?