Evidence Against Interest: The Minority Role in the Housing Bubble

Here’s one of those new-fangled dot maps showing 2003 mortgages in the three southwestern Sand States of California, Nevada, and Arizona. Along with Florida, they constituted the great majority of the run-up in home values in 2004-2006 and the great majority of the losses in 2008 (i.e., the home value losses largely came before the Great Recession and played a major role in setting it off).

Here’s what mortages given out in prosperous 2003 looked like by race, with whites represented by blue dots, Hispanics red, blacks yellow, and Asians gray: 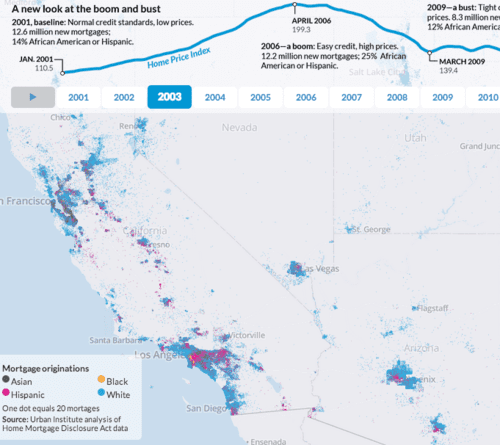 And here’s what mortgages given out in metastasized 2006 look like by race: 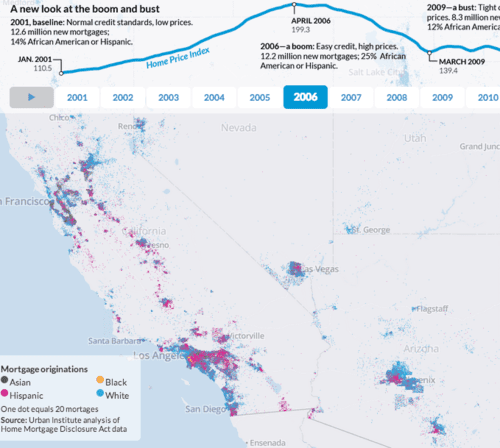 Here is another graph from the Urban Institute showing how inflated lending to Hispanics and blacks was in 2005 versus the more prudent recent year of 2012: 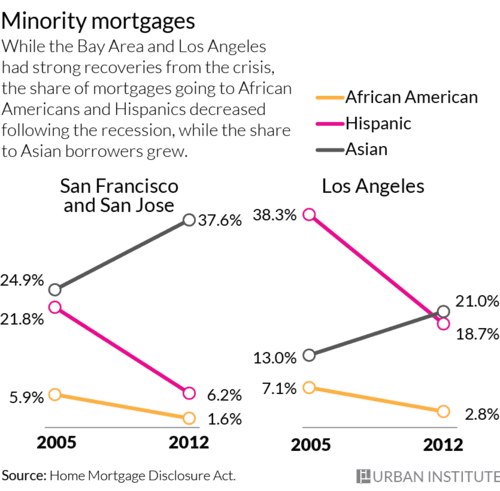 During the years when Bush was promoting the Ownership Society and the White House Conference on Increasing Minority Homeownership, Hispanics were the marginal buyers, the major new source of demand that helped send home prices skyrocketing. Unfortunately, they also turned out to be marginal debtors who defaulted in huge numbers when it turned out that turning a neighborhood Hispanic didn’t raise property values.

I realize I’ve been banging on about this since 2007, but how many people of power and influence actually have a clear picture of what happened in their heads?