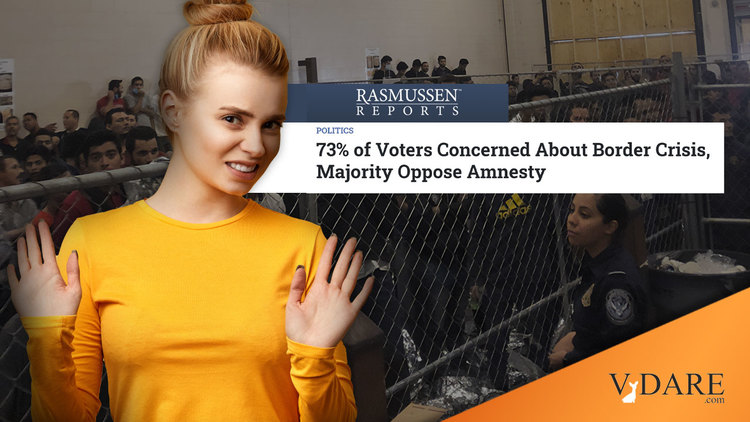 A new Politico/Morning Consult poll finds that 43% of Americans want to give illegal aliens a pathway to citizenship. This represents a 14 percent decline since January. Even Democrats are starting to waver, with just 57% of Biden’s own party supporting amnesty—down from 72% in January. One fourth of Republicans support the poll’s presentation of amnesty [POLITICO Playbook: What the Duckworth-AAPI episode revealed, by Eugene Daniels et al., Politico, March 24, 2021].

It’s likely the real support for amnesty is even lower. Most of these polls present amnesty as an either/or option. Respondents are usually asked whether they support a nice-sounding legalization that makes illegals pay back taxes, or if they want a scary-sounding mass deportation. Rarely do pollsters ask a simple yes or no, which would likely yield less support for a pathway to citizenship. But even the deceptive polls can’t hide the truth anymore. That’s how bad the border crisis is for Biden.

Politico credits Republican messaging for the switch. Every GOP lawmaker should note that unapologetic immigration patriotism plays well with the public.

Rasmussen found a similar result last week. Its poll showed 51% of Americans opposed amnesty and nearly three-fourths of the country are concerned about the border. These numbers will continue to move in an immigration patriot direction as the crisis gets worse [73% of Voters Concerned About Border Crisis, Majority Oppose Amnesty, Rasmussen Reports, March 15, 2021].

Average Americans can tell it’s a bad idea to reward millions of illegals when the entirety of Central America is trying to pour in. Democrats lack this basic common sense.