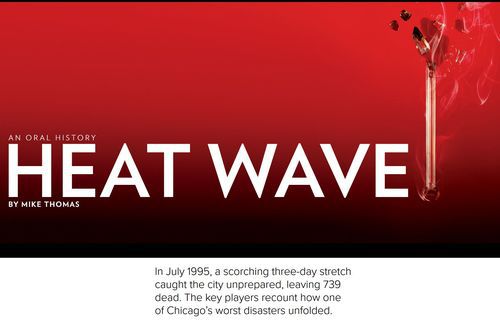 With lots of talk about how to estimate death tolls from natural disasters, here’s one almost completely forgotten instance that I experienced: the day it got to 106 degrees in Chicago: July 13, 1995. From Wikipedia:

The 1995 Chicago heat wave was a heat wave which led to 739 heat-related deaths in Chicago over a period of five days.[1] Most of the victims of the heat wave were elderly poor residents of the city, who could not afford air conditioning and did not open windows or sleep outside for fear of crime. …

Also, the power went out in many neighborhoods including mine. All the food in my refrigerator spoiled. I drove over to a part of the city that had power and went to a nice cool air-conditioned movie theater and saw “Apollo 13,″ which I enjoyed very much, thank you

Most of the heat wave victims were the elderly poor living in the heart of the city, who either had no working air conditioning or could not afford to turn it on. Many older citizens were also hesitant to open windows and doors at night for fear of crime. Elderly women, who may have been more socially engaged, were less vulnerable than elderly men. By contrast, during the heat waves of the 1930s, many residents slept outside in the parks or along the shore of Lake Michigan.

Before the 1960s crime wave, city people used to sleep outdoors rather often during heat waves.

Because of the nature of the disaster, and the slow response of authorities to recognize it, no official “death toll” has been determined. However, figures show that 739 additional people died in that particular week above the usual weekly average.[10] Further epidemiologic analysis showed that blacks were more likely to die than whites, and that Hispanics had an unusually low death rate due to heat. At the time, many blacks lived in areas of sub-standard housing and less cohesive neighborhoods, while Hispanics at the time lived in places with higher population density, and more social cohesion.[2]

Mortality displacement refers to the deaths that occur during a heat wave that would have occurred anyway in a near future, but which were precipitated by the heat wave itself. In other words, people who are already very ill and close to death (expected to die, for instance, within days or a few weeks) might die sooner than they might have otherwise, because of the impact of the heat wave on their health. However, because their deaths have been hastened by the heat wave, in the months that follow the number of deaths becomes lower than average. This is also called a harvesting effect, in which part of the expected (future) mortality shifts forward a few weeks to the period of the heat wave. Initially some public officials suggested that the high death toll during the weeks of the heat wave was due to mortality displacement; an analysis of the data later found that mortality displacement during the heat wave was limited to about 26% of the estimated 692 excess deaths in the period between June 21 and August 10, 1995. Mortality risks affected Blacks disproportionally. …

Other aggravating factors were inadequate warnings, power failures, inadequate ambulance service and hospital facilities, and lack of preparation.[14] City officials did not release a heat emergency warning until the last day of the heat wave. Thus, such emergency measures as Chicago’s five cooling centers were not fully utilized. The medical system of Chicago was severely taxed as thousands were taken to local hospitals with heat-related problems. …

The scale of the human tragedy sparked denial in some quarters, grief and blame elsewhere.[2] From the moment the local medical examiner began to report heat-related mortality figures, political leaders, journalists, and in turn the Chicago public have actively denied the disaster’s significance. Although so many city residents died that the coroner had to call in nine refrigerated trucks to store the bodies, skepticism about the trauma continues today. In Chicago, people still debate whether the medical examiner exaggerated the numbers and wonder if the crisis was a “media event.”[8] The American Journal of Public Health established that the medical examiner’s numbers actually undercounted the mortality by about 250 since hundreds of bodies were buried before they could be autopsied.[10]

In the following years, any time the weather forecast called for hot weather, Mayor Daley would go on TV to remind people to check in on their elderly relatives and neighbors.

So 739 deaths is a big number. On the other hand, in terms of years of life expectancy lost, this wasn’t that big of a deal. Probably very few few of those who died were employed at the time, so their deaths weren’t a big economic blow to their dependents.

In contrast, for example, practically everybody killed in 9/11 was currently employed, or a tourist.