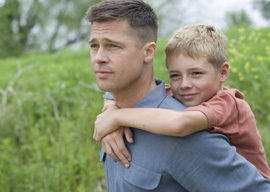 From the Tulsa World:

Emil A. Malick, age 96, resident of Bartlesville, died on February 9, 2013 at Jane Phillips Hospital. A Requiem Mass will be said at St. Luke’s Episcopal Church on Saturday, February 16, at 2 PM. The family has requested no flowers. Survivors include his son Terrence and wife Alexandra of Austin, Texas, and his daughter-in-law Ann and grandsons David and Michael of Tulsa, Oklahoma.

Due to traffic, I missed the first 15 minutes or so of Terrence Malick's 2011 film The Tree of Life, by which point everybody in the audience who had arrived on time was getting pretty sick of the movie. So, I came in, fortunately, just as the film was finally focusing in from the Big Bang to growing up in the Oil Patch in an Eden-like 1950s small town as the son of a petroleum industry inventor, with Jessica Chastain ethereally beautiful as your mother and Brad Pitt giving the greatest performance of his career as your father. I wrote:

If you like this style (and I do, very much), The Tree of Life might call to mind other works about growing up, such as Wordsworth’s The Prelude, Twain’s Huckleberry Finn, or Nabokov’s Speak, Memory. Parts of it are that good.

Someday, if we're very lucky we may see a 90-minute Editor's Cut of The Tree of Life minus all of Malick's trademark distractions, leaving us with its magnificent understated core: the Book of Genesis onscreen, the Book of Job looming offscreen.