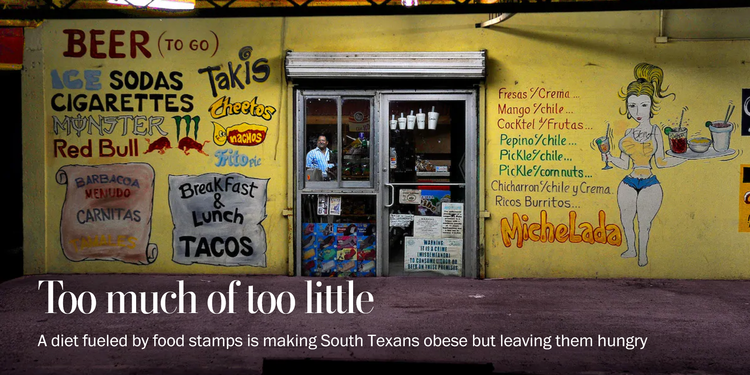 From a while ago in the Washington Post, Eli Saslow reports from the Rio Grande Valley in Texas on Blanca, a single mother of five:

But the cheap foods she could afford on the standard government [food stamp] allotment of about $1.50 per meal also tended to be among the least nutritious — heavy in preservatives, fats, salt and refined sugar. Now Clarissa, her 13-year-old daughter, had a darkening ring around her neck that suggested early-onset diabetes from too much sugar. Now Antonio, 9, was sharing dosages of his mother’s cholesterol medication. Now Blanca herself was too sick to work, receiving disability payments at age 40 and testing her blood-sugar level twice each day to guard against the stroke doctors warned was forthcoming as a result of her diet.

Hidalgo County, Tex., is one of the fastest growing and poorest places in the nation. Although 40 percent of the county's residents are enrolled in the food-stamp program, diabetes and obesity have exploded in the region.

She drove toward the doctor’s office on the two-lane highways of South Texas, the flat horizon of brown dirt interrupted by palm trees and an occasional view of the steel fence that divides the United States from Mexico. Blanca’s parents emigrated from Mexico in the 1950s to pick strawberries and cherries, and they often repeated an aphorism about the border fence. “On one side you’re skinny. On the other you’re fat,” they said. Now millions more had crossed through the fence, both legally and illegally, making Hidalgo County one of the fastest-growing places in America.

“El Futuro” is what some residents had begun calling the area, and here the future was unfolding in a cycle of cascading extremes:

Hidalgo County has one of the highest poverty rates in the nation . . . which has led almost 40 percent of residents to enroll in the food-stamp program . . . which means a widespread reliance on cheap, processed foods . . . which results in rates of diabetes and obesity that double the national average . . . which fuels the country’s highest per-capita spending on health care.

This is what El Futuro looks like in the Rio Grande Valley: The country’s hungriest region is also its most overweight, with 38.5 percent of the people obese. For one of the first times anywhere in the United States, children in South Texas have a projected life span that is a few years shorter than that of their parents.[Too much of too little | A diet fueled by food stamps is making South Texans obese but leaving them hungry, November 9, 2013]

Tyler Cowen's leguminous insight about the future of America — "Let them eat beans!" — isn't popular in El Futuro, where local sentiment is more inclined toward "Let them drink Red Bull!" Saslow's article goes on to document how a Mexican-American politician tried to change the law so that food stamps couldn't be used to purchase energy drinks, which are made mostly of sugar, caffeine, and profit margin. But a combination of corporate and liberal interests defeated his reform effort.