Jack McCain, son of the legendarily-bad-on-immigration John McCain, has lashed out at critics of a mixed-race couple in an Old Navy ad.  His wife is black. 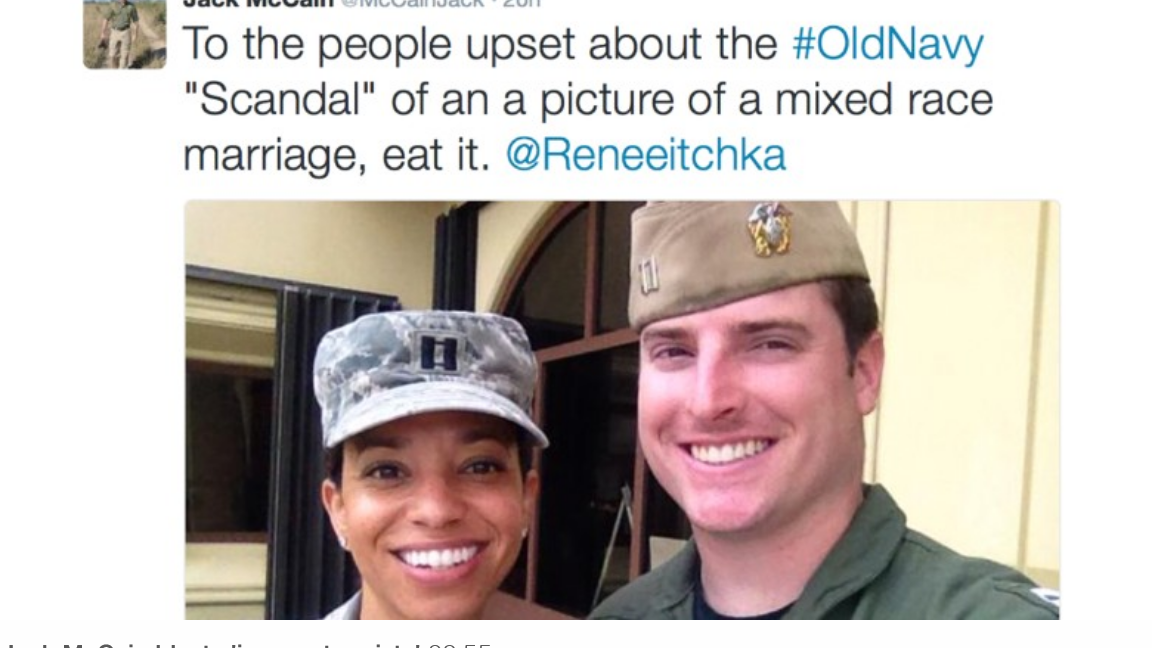 To the people upset about the #OldNavy "Scandal" of an a picture of a mixed race marriage, eat it. @Reneeitchka pic.twitter.com/yA5YwbZRcm

This was followed by

I hope this one burns too, you ignorant racists. Here is us on our wedding day. @Reneeitchka pic.twitter.com/1VSd2gqH9W

And of course, the #LoveWins hashtag rounds it all out.

Is it just me, or does this attitude complicate the supposed blind purity of mixed-race relationships?  McCain would surely insist he married for love, but he also apparently enjoys the hugely political side effect of showing what a non-racist he is.  And revels in the offense taken by the 'racists', like a rebellious teenager who delights in whatever shock he can cause his starchy parents.

It's just never occurred to me to flash my wedding picture to anyone and sneer that "I hope this one burns."  Seems a little incongruent:  sacred and beautiful ceremony, and...  opportunity to torture other people!

I'm reminded of a girl in college—the white daughter of a high-ranking career military man—who dated a black guy partly for what appeared to be the discomfort it caused her father.  True love?  Nah.

There are interracial marriages that are pretty obviously meant to leverage political advantage.  Bill DeBlasio's marriage is one—there are undeniable advantages to having a black wife when you are trying to achieve the mayoralty of New York City.

Jeb Bush's marriage to Columba is another—however much they truly fell in love, it could not have escaped the would-be president's attention that America's biggest minority could be reeled in this way.

Was Jack McCain attempting something similar?  Who knows.

As far as telling us to 'eat it', we've been doing exactly that from Tom and Helen Willis on the 70’s sitcom The Jeffersons to the Cheerios ad.

How much more force-feeding does he want?