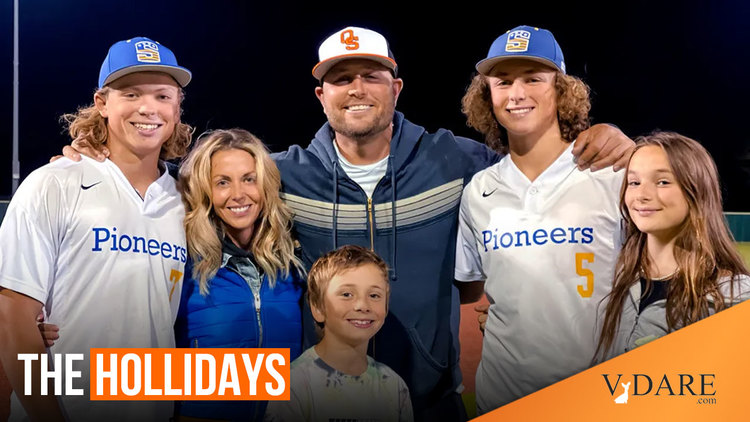 The Baltimore Orioles made high school shortstop Jackson Holliday the first pick of the MLB draft Sunday, adding a high-upside infielder and the son of a major leaguer to a farm system consistently ranked among the game’s best.

Holliday, son of seven-time all-star Matt Holliday, was the first selection in a draft that featured several players with major league relatives. With the second pick, the Arizona Diamondbacks took Druw Jones, the talented son of 10-time Gold Glove winner Andruw Jones; draft analysts believe he has the tools to be a carbon copy of his father.

The prevalence of major league ties among first-round picks is a complicated reality, one that speaks to the comfort executives have with those who understand the major league experience and to the advantage offered to players who spend their youth around the best in the business. Yet even as those born into baseball dominated the first round, Sunday night’s class also was historic for its diversity: For the first time in major league history, four of the first five picks are Black, an encouraging trend for a game that has seen the number of Black players drop precipitously over the past few decades. …

One of the early ones I can remember was 1970s Phillies catcher Bob Boone being the son of 1950s slugger Ray Boone (and since then father of Aaron and Bret Boone). By the 1990s, however, the best players in each league, Barry Bonds and Ken Griffey Jr., were the sons of 1970s All-Stars. (Griffey Jr. was just like Griffey Sr. but with tremendous home run power; Barry Bonds took Bobby Bonds’ power and speed and harnessed it to a single-minded will.)

Why the lack of family dynasties for a long time in baseball?

Baseball tended to be expanding its demographic base during the first half of the 20th century: e.g., Southerners didn’t play much baseball until Ty Cobb’s time. (Baseball became the national pastime during the Civil War in hurry-up-and-wait Union Army camps, where the New York version of baseball rules beat out the Boston version for the allegiance of Ohioans and the like.)

Sons of immigrants like the DiMaggio brothers didn’t learn baseball from their fathers.

All the black stars for a while after 1947 were of course first generation MLB stars.

Recruiting from Latin America got going more after the war: e.g., Luis Aparicio’s shortstop dad, a legend in Venezuela, probably wouldn’t have been kept out by the color line, but there wasn’t a pipeline of talent from Venezuela to MLB back then, so it took until the son’s generation for an Aparicio to play in the majors.

But when baseball got its hooks into a community, it did so big time as the single most popular sport. Thus a boy didn’t need his father to instruct him or provide expensive lessons: he just went to the local sandlot where everybody played baseball and would point out his flaws in technique.

Baseball is still broadly popular, but it’s much less universal than in 1950. So, it’s increasingly like many other sports these days, where it helps to have a dad tutor you or pay for expensive training.

I’m guessing that one huge nurture advantage that the sons of major league players tend to have over their rivals is that they tend to grow up with a state of the art hitting shed in the backyard, with a pitching machine that can throw 95 mph sinkers and the like.

Baseball is a lot like golf: playing is fun, but it’s a slow-paced game so you don’t get much practice at particular skills during a round. To become a pro, it really, really helps if during your adolescence you had access to the full practice facilities of a country club, such as a practice sand trap to hit hundreds of shots out of per week.

Similarly, being able to take 100 swings per day all winter in your rich dad’s MLB-quality hitting shed must be a sizable advantage.

For example, recent data on pitch movement appears to have decisively answered a long-standing mystery of baseball: why are about 30% of big-league pitchers left-handed compared to only about 10% of the population? This is especially strange since left-handed pitchers usually have the “platoon advantage” (right-handed batters can hit left-handed pitchers better and vice-versa) working against them.

It was long hypothesized that left-handed pitchers must on average have better “stuff,” that their pitches must curve more through the air. But now with every MLB pitch being tracked to the fraction of an inch by lasers, we know that isn’t true. The left-handed pitcher’s advantage is instead simple unfamiliarity. Every hitter grows up hitting against predominantly right-handed pitchers in games, so most batters hit righties a little better on average than lefties.

So, the amount of high-caliber batting practice a teen can get makes a certain difference in how well-grooved his swing is to face all the different types of pitchers he’d face in the big leagues. Having access to the latest training technology and the most expensive travel team competition can make a big difference.