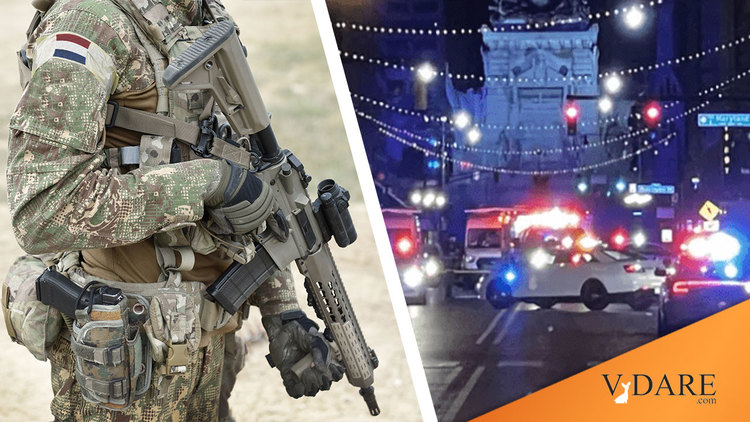 Dutch commandos traveled to Indiana for training in urban warfare and got more than they bargained for.  Three commandos were shot in downtown Indianapolis, and one died.

According to the Indianapolis Star :

Three men were shot in the heart of Indianapolis’ entertainment district early Saturday morning [August 27], leaving two of them in critical condition, according to Indianapolis police. The three are Dutch soldiers in Indiana for training, according to the Netherlands Department of Defense.

One of the soldiers later died.

The shooting occurred around 3:30 a.m. in the 100 block of South Meridian Street, near the intersection of Meridian and Maryland streets. Police believe a disturbance between the three victims and another person or people led to the shooting and that there is no threat to the public.

The men are members of the Korps Commandotroepen, or Commando Corps, which is a special defense unit of the Royal Netherlands Army, according to the defense department. The incident happened during the military’s free time, in front of the hotel where they were staying, the department says.

The commandos were in the state of Indiana to train in urban warfare. From CNN:

The Dutch soldiers had been training at the Muscatatuck Urban Training Center, a 1,000-acre complex southeast of Indianapolis that is being used for training by the Department of Defense ”as well as other allies,” the Indiana National Guard told CNN affiliate WISH in a statement.

[3 Dutch soldiers were wounded in a shooting outside an Indianapolis hotel, authorities say, by Liam Reilly, CNN, August 28, 2022]

Maybe that urban training center should be moved to downtown Indianapolis.

So what actually occurred? There’s not much information on that. From the BBC:

Police believe the shooting followed an earlier disturbance in downtown Indianapolis, but gave few details...The city’s law enforcement agencies are still investigating the shooting and have so far not made any arrests.

Will they ever arrest anyone for it?

The incident took place just before 04:00 (08:00 GMT) on Saturday outside the Hampton Inn Hotel in the city’s entertainment district, where the three soldiers had been staying. Officials believe the shooting followed a previous altercation including one or multiple other people at another location in the city.

The city’s mayor told reporters on Monday that the attack may have been a drive-by shooting. ”As I understand it there was a scuffle — a kerfuffle — at a bar and the Dutch guardsmen had returned back to their hotel,” said Mayor Joe Hogsett. ”What they were doing outside I’m not altogether sure — but I’m told the alleged perpetrators did a drive-by shooting and ultimately three were victimised by that shooting.”

The dead commando has been identified.

The deceased soldier has been identified by police as Simmie Poetsema. A spokesman for the Royal Netherlands Army told the Indianapolis Star newspaper on Monday that his family were at his bedside when he succumbed to his injuries.