After spending a July evening dining at a restaurant with his family, 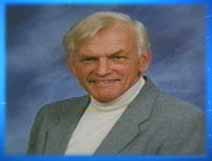 Leonard Dykstra (pictured) was struck down and killed on the way home by a drunk driving illegal alien.

Efrain Garcia-Miron, whose blood alcohol level was twice the legal limit, pleaded guilty on Dec. 7 and will be sentenced in January. A witness stated that Garcia-Miron drove erratically before he swerved across the lane and crashed head-on into Dykstra's vehicle.

A Wyoming man had a blood-alcohol level of 0.179 — more than twice the legal limit — when he drove across the centerline and killed an 80-year-old man, court records show.

The victim, Leonard Dykstra, a grandfather of five, died Friday night on the road just three minutes from his home.

Efrain Garcia-Miron, 32, was arraigned Monday in 59th District Court on a charge of operating while impaired causing death. If convicted, he could face up to 15 years in prison.

Dykstra, a retired U.S. Postal worker, had spent Friday evening doing what he loved most, said his son, Brian Dykstra.

He joined his family at Russ's Restaurant in Holland, where his granddaughter works. He made sure she waited on the family, he said.

Then, it was onto his son's home in Hudsonville for more family time.

"He wouldn't miss that," said his cousin, Marilyn Dykstra.

Just before 10 p.m., he was headed home on a road he had taken often — Wilson Avenue SW, near Johnson Park in Walker.

"He was just minding his own business," said his cousin, John Dykstra, who also lives next door to the victim. "He's just driving home and here comes a guy over the hill."

When police arrived, Garcia-Miron smelled strongly of alcohol and appeared off-balance, police wrote in an affidavit.

His driving record lists five moving violations since 2004, including speeding and running a stop sign, according to the Secretary of State.

Why wasn't the obviously dangerous foreigner checked for his immigration status and deported? Sadly, this tragic death of a beloved grandfather could have been prevented by proper functioning of law enforcement.