Another family has been devastated by a drunk-driving illegal alien. Mother and hospice nurse Diane Bronson and her 11-year-old daughter Anna of Belton, Missouri, were killed on July 4 in a head-on crash. The deadly SUV was driven by 18-year-old Felix Solano Gallardo whose blood alcohol was measured two hours after the wreck at .185, double the legal limit in Missouri. He had driven 14 miles the wrong way on the interstate before smashing into the Bronson's car.

Diane and her daughter were on their way to a Fourth of July celebration in Sugar Creek where her husband Buddy was set to ride an antique scooter in the parade. They never made it. 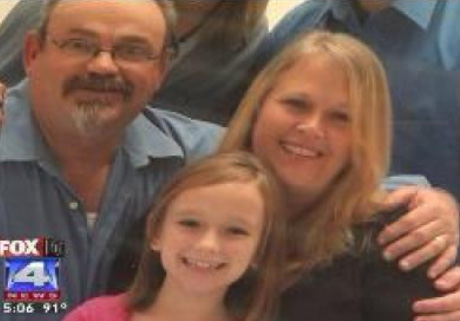 Diane K. Bronson was eight months pregnant when a state paint-striping truck rear-ended her vehicle in 1999.

Firefighters had to cut her out of the wreckage, and Bronson suffered a serious head injury. But she survived, as did her prematurely born baby, whom she named Anna.

On Monday - more than 11 years later - Bronson and Anna, of Belton, were again involved in a highway crash. But this time, neither survived.

Police blamed the 8:30 a.m. wreck on Interstate 435 near 63rd Street in Kansas City on a drunken driver going the wrong way.

Jackson County prosecutors charged Felix Solano-Gallardo, 18, of Kansas City, Kan., on Monday with two counts of involuntary manslaughter. His blood alcohol content was 0.185, more than double the legal limit of 0.08, more than two hours after the wreck, according to court records.

Police were still working Tuesday to confirm the man's identity. According to court records, Gallardo gave his name as Felix Gallardo, but he had two Mexican identification cards on him with a different name, and both cards had different photos. Prosecutors think he is an illegal immigrant.

Police said they think Gallardo had been driving the wrong way for at least 14 miles because they think he ran a driver off of Interstate 70 into a concrete median near Harrison Street earlier. The victim told police the driver drove at him from one side of the highway to the other and appeared to be trying to hit him, police said.

At least nine motorists called 911 to complain about a wrong-way driver on I-70 or I-435 Monday morning.

Gallardo was uncooperative with police and invoked his right to an attorney using an interpreter, according to court records.

Bronson and her daughter were headed to meet her mother and brother for breakfast before attending a July Fourth parade in Sugar Creek. They never made it to breakfast.

Bronson's husband and Anna's father, Buddy Bronson, said he was preparing to ride an antique motor scooter in the parade when he got a call saying police were at his house looking for him and he needed to get home right away.

Buddy Bronson said he lost his wife of 20 years and only biological child. His wife had two sons, ages 20 and 22, and Bronson said they were working through their grief together.

"We're really rattled," he said. "This is not something we expected at all."

Diane Bronson worked as a hospice nurse and "loved it," Buddy Bronson said.

He said his daughter was "smart as a whip and the life of the neighborhood." Anna swam at a neighbor's pool nearly every day, and enjoyed playing softball, dancing and drawing pictures.