Cape Town, South Africa, is on the brink of a drought disaster where the taps may literally run dry for a city of four million. Extreme conservation measures have pushed back the so-called “Day Zero” from March to perhaps a date later in the spring. The rainy season there starts in June, so hopes are pinned on the rains to return then, but of course there is no guarantee of that.

The photo below appeared on the front page of a California newspaper last January, reflecting the seriousness of state residents’ attitude toward the issue of water supply after a terrible five-year drought. 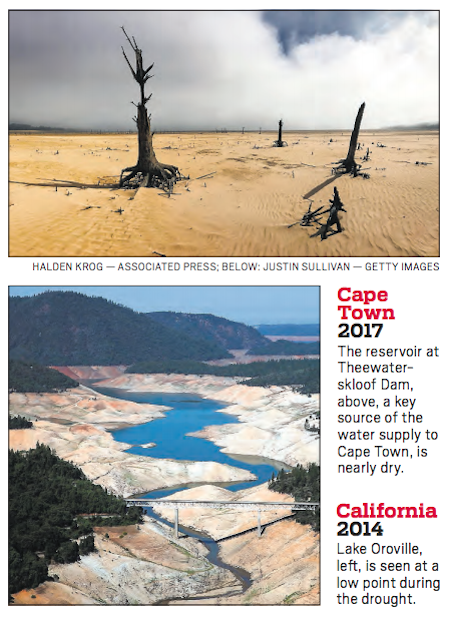 The PBS Newshour reported on the water crisis as part of its ongoing series, Peril and Promise: the Challenge of Climate Change. It’s funny how nobody discusses the Challenge of Overpopulation when today’s number is over 7.6 billion persons on the planet. People used to discuss overpopulation, but now it’s somehow impolite to mention the limits to what nature can provide to so many humans.

Interestingly, Cape Town’s population in 1960 was fewer than one million, and a drought with that many water users would have been far easier to manage.

But the PBS segment does show the adjustments everyone has to make in their daily lives to conserve water.

I suspect that we California residents came closer to the point of no water than Sacramento would like to admit. But Governor Jerry Brown, who fancies himself to be an environmentalist, never suggested that drought-prone California should be encouraging immigrants of various legalities to live here. On the contrary, in 2014 he invited Mexicans to come, as reported by Breitbart.com: Gov. Jerry Brown to Mexican Illegals: ‘You’re All Welcome in California’.

Now as we approach 40 million California residents, the limits to growth should be recognized.

But back to Cape Town:

MARTIN SEEMUNGAL: This is Cape Town, world famous for its breathtaking scenery. Table Mountain, beautiful beaches, stunning winelands. It is a major tourist destination. But this is Cape Town’s water supply. Reservoirs which depend solely on rainwater are dangerously low, bone dry in places. And they are Cape Town’s only source of water. According to the experts, Cape Town is experiencing its worst drought in 100 years. Average annual rainfall should be around 21 inches per year. Last year it was down to 6 inches. The drought has lasted 3 years.

SOLLY FOURIE: So its been a sustained drought situation which has come upon us like I would call an intravenous drip. So we’ve had year after year after year of increasing rainfall shortage.

MARTIN SEEMUNGAL: The reservoirs, there are 6 major ones, are in the mountainous areas 45 miles outside the city. The biggest is Theewaterskloof. Usually a popular spot for recreational boaters. But not these days.

MARTIN SEEMUNGAL: And the levels continue to drop to 18.5 percent of capacity recently, pushing the city to the brink of what they call around here “Day Zero.” That would be if and when the levels reach a low of 13.5 percent. When that happens Cape Town will cut the water supply to most of the city. It will mean mass distribution at 200 water points. Limits of 25 litres a day per person, about 6 Gallons.

IAN NEILSON: Well it would be absolutely calamitous, the social economic implications are enormous.

MARTIN SEEMUNGAL: The city has launched an aggressive campaign to avoid Day Zero. Mandatory limits, thirteen Gallons per person, per day. No washing of cars, no watering gardens. This man was spotted using a hose. The police swooped in. He only avoided a fine when it was explained it was well water purchased elsewhere and trucked in. Capetonians have drastically cut their water usage and it’s had a positive impact. Day Zero, initially set for March was pushed to April then to August. Now the city is saying it might not happen this year.

JULIA LEE: When we thought day zero was coming in March, April. It’s amazing how you go into like survival mode so every single drop of water that you see going down the drain kind of like freaks you out and you do everything you can.

MARTIN SEEMUNGAL: Julia Lee and Ross Sylvester live in a typical middle class neighborhood in Cape Town. The crisis has changed the way they think about water. They started doing things differently. First they installed a huge tank to collect rainwater. Among other things they use that water to flush the toilets instead of city water, because every time they flush the toilet it uses 10 litres of water. Residential use accounts for 70 percent of the water demand in Cape Town. So getting ordinary people to cut back is critical. In the kitchen dishes aren’t rinsed and pile up until there are enough to wash together. And they have devised an ingenious way to make the best use of their washing machine.

MARTIN SEEMUNGAL: When was the last time you switched the city water on to flush the toilet?

ROSS SYLVESTER: To flush the toilet, it’s been about three months, been about three months using runoff water and collecting water from the laundry machine, the washing machine. We wouldn’t have to use, we just, it would use 8 flushes of fresh municipality water, eight litres yeah. You’re proud of this? Yes, Quite proud.

MARTIN SEEMUNGAL: One place people are turning to is the Newlands Freshwater Spring at the bottom of Table Mountain. This water comes from one of 3 huge underground aquifers in the region. There are plans to eventually tap into them to augment the city’s main water supply. But it is a delicate system, there is a danger of overuse, officials say it will be monitored closely.

MARTIN SEEMUNGAL: This spring never used to be particularly busy but there has been a dramatic increase in the last several months.

MAN: We can’t even shower properly. We wash in a basin then we just get under the shower and just wash us down. You understand. One minute shower that’s all you have.

MARK BESTER: I come with a lot of buckets. I collect about 300 litres at a time. It lasts me ages so 2 buckets saves me using my own water and saves Cape Town.

MARTIN SEEMUNGAL: Businesses are required to cutback too by 45 per cent. GreenCape, a non profit environmental organization provides advice and information to the commercial and industrial sector.

CLAIRE PENGELLY: So whereas before we were struggling to perhaps even get an audience to talk to business about their water solutions and the things they should be looking at. Now everyone’s coming to us asking us for some ideas and solutions.

MARTIN SEEMUNGAL:The Bayside Mall has installed tanks to collect rainwater from the roof and most of the taps in the bathrooms have been turned off. There are notices everywhere. Those efforts combined with a drastic cut to the agricultural sector have kept Day Zero at bay. Meanwhile, other Capetonians have never been fortunate enough to be carefree about water. In the poor, predominately black and mixed race townships on the outskirts of Cape Town water has been an issue for decades. Many of the houses that have it simply can’t afford to pay the bills. So a few years ago the city installed meters to make certain people weren’t using more water than they could pay for. Mzamo Kwezi in Gugulethu township says if the family goes beyond its 350 litre a day quota, the supply is automatically shut. The family doesn’t have the money to pay for tanks to capture rainwater. Or for the transport to fetch water from a spring. Goshi kwezi says when the water is cut it often doesn’t come back for days.

GOSHI KWEZI: There are meals you cannot cook on certain days. When you know there’s no water then you can’t cook things like rice or pasta or anything. You have to try to stick to the meals that use minimal water.

MARTIN SEEMUNGAL: Life in the so called ‘informal’ settlements in the townships is even harder, those sections that are enormous shantytowns. There is no running water in these shacks here not in the kitchen, no showers, no toilets to flush. People here get their water from communal taps. They often have to line up for it, and then carry it home.

MARTIN SEEMUNGAL: Despite the huge population in the townships it’s estimated people here only account for four percent of the water usage. In the event of a Day Zero the taps used by Cape Town’s poorest will keep running. JP Smith is the city councillor responsible for managing Cape Town’s Day Zero, in particular what sectors would keep getting water.

JP SMITH: What would remain on the network is your informal settlements, your critical infrastructure, airport, harbors, big hospitals, key state infrastructure.

MARTIN SEEMUNGAL: People in township houses with services like Goshi Kwezi will have to lineup at the water collection points just like everyone else in Cape Town, rich, poor, it won’t matter. And in a country still emerging from decades of Apartheid, the water crisis has been a great equalizer.

MARTIN SEEMUNGAL: Cape Town is scrambling to avoid its doomsday scenario. Expensive desalination plants are being built to convert seawater to freshwater. But City Officials say it will take several weeks to bring them online and that even then they won’t produce enough to solve the immediate crisis. The hope is they will create a buffer for future shortages. Now it’s all about how much rain will fall. The rainy season here is June, July, and August, the winter season in the southern hemisphere. The countdown to Day Zero may have stopped, for now, but there are real fears it could restart anytime.