Quickly!  What are the two MOST IMPORTANT reasons the tech industry loves the H-1B program so much?

If you answered "cheap labor," you only receive partial credit.  Yes, it's true in general, but the BIG savings accrue from using H-1B to avoid hiring older (35+) Americans.

If you did not also answer "immobile labor, tied to the employer," then sorry, you don't get a passing grade.  (I know you've been working hard in this class, but you've been missing the major points.) 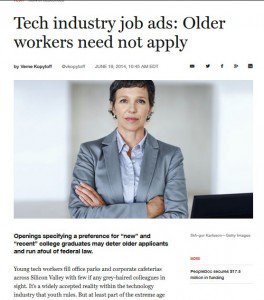 Today's post, though, will concentrate on the age issue, prompted by the article in Fortune, "Tech Industry Job Ads: Older Workers Need Not Apply," by Verne Kopytoff. June 19, 2014.

The title may be banal, but the article itself is truly outstanding. Here is a journalist who really did his homework!  I don't mean to imply that the excellent journalists who read this e-newsletter don't do their homework.  But many in the field write articles using the formula: (a) put a sympathetic victim in the lead, (b) get two quotes from both sides of the issue (one of which blames the victim), and (c) call it a day.  A lot of people complain to me that the press is biased on H-1B issues, but in my 20+ years of writing in this area, I've only encountered two really biased reporters (one, unfortunately, is recent); instead, the problems come largely from laziness.

The article here takes as a starting point a very good public source of data—job ads.  These openly ask for (and implicitly, restrict to) new or recent graduates.  This is extremely common, to the point where, Intel for example, has formal NCG and RCG job categories (New/Recent College Graduate).

I've written about this before.  See for instance a Facebook example athttp://heather.cs.ucdavis.edu/Archive/PlanetSandberg.txt

This job has a Senior title—for only 5 years of experience (or MS + 2 years).  Senior!

And note that that job at NASA is actually a UC job, not formally a NASA one, so H-1Bs probably qualify under various loopholes.  (Some years ago, industry lobbyist Harris Miller got the Defense Dept. to relax rules on this anyway.)  But even without H-1Bs, those with, say, 15 years of experience will probably be summarily rejected, I believe. That's if the job is actually open in the first place, which may not be the case.  Given the overly detailed job requirements, it's very possible that they already have someone they want to hire, whether H-1B or American, and are just going through formalities of advertising the job.

As someone who (used to) serve as an expert witness in age discrimination cases, I've always wondered how the tech firms could get away with advertising jobs as being restricted to new/recent graduates.

Well, this does-his-homework reporter wondered too, and he asked the EEOC about it.  Turns out that the EEOC thinks it's illegal, as you'll see in the article.  Unfortunately, even the EEOC lawyer really doesn't get it; he says, "We think it deters older applicants from applying," when what he should have said was, "We suspect that employers use this ploy to automatically reject the older workers without even a phone call."

In this manner, older applicants are rejected as "overqualified."  And with the overly long list of job requirements ("overly" in the sense that advance knowledge of the skills is not essential to doing the job well), the older workers are, ironically, also considered UNDERqualified. Overqualified AND underqualified—doesn't leave much, does it?

The employer then, in a green card sponsorship for a foreign worker, can say that no suitable Americans were found for the job.  And hiring managers will tell you, in full though naive sincerity, that they had to resort to hiring H-1Bs because there were no qualified American applicants; HR won't send them the over-35 American applicant files (or maybe not ANY American applicant files), so the managers really believe there is a talent shortage that makes H-1B essential.

The one substantial error made by the author of this piece is that he accepts the firms' statistics on average age of their workers.  This is highly misleading, because they are including types of jobs that are not generally held by H-1B, e.g. managers, accountants, marketers, packagers etc.  This is similar to the trick companies use when they say "Only 5% of our workers are H-1Bs"—even though the figure among engineers and programmers is 50% or more.