Dr. Heather Hackman: Grades And Showing Up On Time Are Examples Of “White Supremacy”—And “Super Whitey” (Normal Teachers) Will Be Swept Aside! 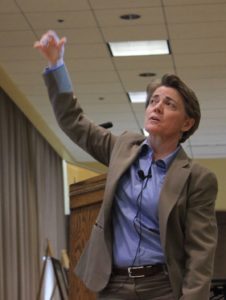 The Daily Caller is checking up on the 17th Annual  “White Privilege Conference”, held in Philadelphia from April 15-17.    It’s another example of the sort of wacko yet totalitarian ideas that are damaging public education.  Here’s what one white lady  consultant from Minneapolis is preaching.

A professional education consultant and teacher trainer argued at the White Privilege Conference (WPC) in Philadelphia that great teachers must also be liberal activists, and described in detail her goal for destroying the “white supremacist” nature of modern education.

Professional Educator: Grades, Showing Up On Time Are A Form Of White Supremacy,  By Blake Neff, Daily Caller, April 16, 2016

Just think.  Dr. Heather Hackman (above, right) is the sort of fanatic who is likely to influence the education students who may be teaching your children in public schools.

Heather Hackman operates Hackman Consulting Group and was formerly a professor of multicultural education at Minnesota’s St. Cloud State University, where she taught future teachers. On Friday [April 15], Hackman was given a platform at WPC to deliver a workshop with the lengthy title “No Freedom Unless We Call Out the Wizard Behind The Curtain: Critically Addressing the Corrosive Effects of Whiteness in Teacher Education and Professional Development.” The long title masked a simple thesis on Hackman’s part: Modern education is hopelessly tainted by white supremacy and the “white imperial gaze,” and the solution is to train prospective teachers in college to be activists as well as pedagogues.

It appears the “activist” part is the more important of the two.

In fact, Hackman argued teachers shouldn’t even bother teaching if they aren’t committed to promoting social justice in school.  “Education is not about the mere reproduction of knowledge,” Hackman said. “Education is the practice of freedom. And as a result, we have to have [teaching] students becomes activists as well as teachers.”

By “freedom” Hackman [Email her] means agreeing with her  worldview.

Understand that it’s not good enough to be a fair teacher and treat all students, of all backgrounds, equally.  Oh no, there’s much more than that.

Creating educators who are proper activists, Hackman continued, means training them to not only to encourage diversity but also to engage with the systemic oppression she says is pervasive in the entire educational system. In Hackman’s telling, virtually everything associated with being a good student in modern education is actually just a tool of racist white supremacy.

So what does she mean by “white supremacy”?

“The racial narrative of White tends to be like this: Rugged individual, honest, hard-working, disciplined, rigorous, successful,” she said. “And so then, the narrative of U.S. public education: Individual assessments, competition, outcome over process (I care more about your grades than how you’re doing), ‘discipline’ where we care more about your attendance and making sure you’re not tardy than we care about your relationships  … proper English must be spoken (which is just assimilation into standard U.S. dialect), hierarchical power structure, and heavy goal orientation.”

IN other words, the qualities that made America great, and make for successful students, are forms of white supremacy?

While the traits listed may simply be regarded as positive traits for success in the modern world, Hackman described them as specific cultural traits chosen and emphasized to favor whites to the detriment of non-white groups, who are forced to assimilate white traits such as good discipline and goal orientation or else be left behind.

Careful here, Heather.  Are you saying whites are better students than those from some other groups?

Hackman’s natural solution, then, is to train teachers to move away from all these aspects of white privilege in education. She routinely touted the benefits of collective assessments (measuring student learning at the class level instead of determining whether each student knows the material), as well as eliminating all school grades entirely.

Bad students would be very happy about that last proposal.

Hackman said when she was a professor, she freely employed these methods with her own students. She once let a student complete an essay assignment as a graphic novel, and allowed students to write in non-standard English or even foreign languages she herself couldn’t read.

“If I don’t know [your language,] frankly, that’s my issue,” she said. “All I need to know is that you’re thinking about it, I don’t really care how you do it.”

So a student could just write an essay in gibberish, tell Ms. Hackman it’s in a foreign language, and she’d accept it?

But Hackman acknowledged in the current white supremacist system, there is some expectation that teachers will know conventional English and possess other basic knowledge. As a result, she admitted modern activist teachers should try to learn those things sufficiently to get a job, but only for the purpose of infiltrating schools to change them from within.

Once again, people she influences could be teaching your children someday.

The need for change is pressing, Hackman said, because the current white supremacist school system is literally killing off non-white Americans.  “Inside, I am screaming,” she said.

She predicted her approach will triumph, and the sinister force she dubbed “Super-Whitey” (and compared to the Eye of Sauron) will eventually be swept aside.

“Your time has come,” Hackman said. “If I was a white faculty member and unwilling to get with the program, I do not have any business in teacher education … We do see you, Super-Whitey. We’re coming for you.”