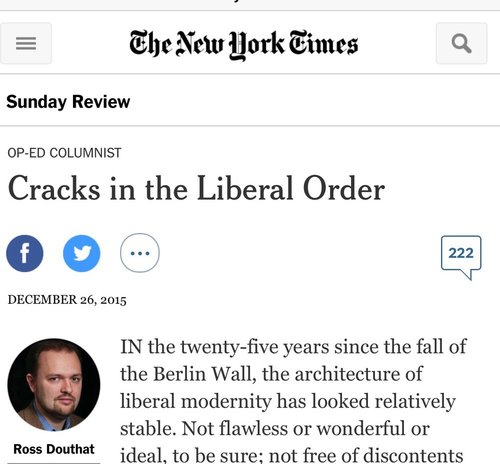 Douthat: "Cracks in the Liberal Order"

Ross Douthat writes in the NYT:

Cracks in the Liberal Order

… Here in the dying days of 2015, though, something seems to have shifted. For the first time in a generation, the theme of this year was the liberal order’s vulnerability, not its resilience. 2015 was a memento mori moment for our institutions — a year of cracks in the system, of crumbling firewalls, of reminders that all orders pass away. …

Europe’s extremes gained, in part, because in 2015 the center was unusually feckless. Angela Merkel’s decision to open Germany’s borders to a million Middle Eastern refugees earned her the praise of her globalist peers. But it also pushed a fast-forward button on long-term trends threatening the liberal project in Europe — the challenge of Islam, the pressure of migration from Africa, the danger of backlash in countries with little experience of mass assimilation.

In the process, Merkel handed ammunition to the argument, expressed in artistic form in Michel Houellebecq’s novel “Submission,” that late-modern liberalism might have a certain tendency toward suicide.

The fundamental problem with liberalism is that it wants to eat its cake and have it too: to privilege traditional minorities, while at the same time demographically reducing through immigration the traditional majority to a minority, who will be disprivileged as the Legacy Majority.