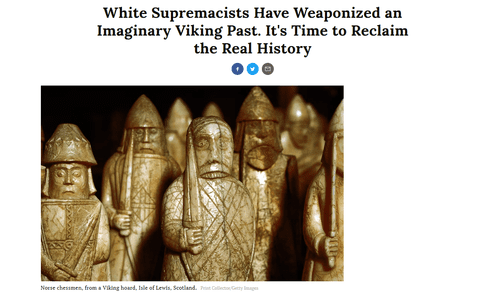 White Supremacists Have Weaponized an Imaginary Viking Past. It’s Time to Reclaim the Real History

After New Zealand passed new gun laws this week… Along with much else from the European medieval world, the Viking past is part of the far right’s standard visual and textual imaginary. That vision of a Viking world depends on contemporary digital and filmic popular culture — such as the TV show Vikings and Viking-adjacent video games — as well as on academic and historical sources.

But far-right Viking medievalism is not about historical accuracy. Rather, it’s used to create narratives. So, to resist the medieval narratives that activate violent hate, we must create counternarratives — and to do that, we must understand the real Viking past and how it has been weaponized.

… Crucially, they were not homogeneous seafarers as is often imagined; they were multicultural and multiracial. …

Wait … they don’t? They are all white?

But didn’t the Vikings kidnap Celtic women from Ireland?

What, Celts are white too? Really? Huh …

Noel Ignatiev has got a lot of ‘splainin’ to do.