Here’s more information about the special unit within the DOJ recently created to go after criminals who obtained US citizenship fraudulently that I reported the other day.

One interesting item is that “20 to 30 lawyers” will comprise the new group, indicating there are quite a lot of fake citizenships to investigate.

But there’s still no mention of how many miscreants will advance to the deportation round, and inquiring minds want to know. 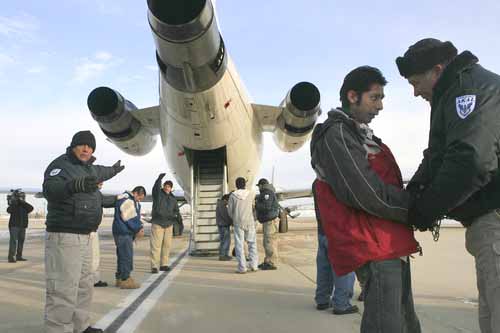 What’s the point of merely demoting the bad guys if they are allowed to stay here?

LAURA INGRAHAM: And speaking of illegal alien criminals, the Trump administration is creating a special unit within the DOJ to denaturalize foreign-born individuals who lied about their criminal pasts in order to get citizenship in this country. The fraudsters that they are going after include not only serious criminals like sex offenders but also terrorists and war criminals. Given the massive spike in referral to the DOJ for these types of cases, this new task force is absolutely necessary.

Joining me now exclusively from Mexico City is John Bash, U.S. attorney for the western district of Texas. John, what can you tell us tonight about this new DOJ unit? We were dealing with county issue right outside of Washington, D.C., which is troubling. Tell us about this new unit.

U.S. ATTORNEY JOHN BASH: Thank you, Laura, for having me on. This new unit addresses exactly the kind of issue you were just talking about, people who molest children, terrorists. We have stood up a unit of 20 to 30 attorneys who are going to work civil denaturalization cases.

And what those cases are is when someone lies in the process of trying to get naturalized to be a citizen, usually about their criminal past, but then nevertheless obtain citizenship, we can actually go after the fact and strip them of citizenship so long as the judge agrees.

And we have been doing that. We have stepped that up 200 percent in the last three years. But it’s getting to the point where we are getting enough referrals that it’s time to stand up a standalone unit, and so we have 20 to 30 lawyers dedicated to bringing justice to victims of child molestation, to victims of terrorism, war crimes, and so forth.

INGRAHAM: John, I want to read for you what the ACLU is saying about this tonight, reacting to your new task force. “The Trump administration announced a new unit that aims to strip Americans of their citizenship. Despite the previous lies, Trump now confirms what we’ve known for years. His systematic campaign against black and brown people extends to U.S. citizens.”

Is that really what’s going on here, John? You’re just willy-nilly going after people of color and just stripping them of their citizenship for no reason?

I will just give you a couple examples. We denaturalized two Balkan conflicts war criminals who murdered unarmed civilians in the Balkans conflict. We denaturalized in my home state of Texas a man who was molesting a seven-year-old girl who was a family member and of course didn’t disclose it on his naturalization application.

I would really like for the ACLU or anyone else to confront the actual facts of these cases and explain why someone who has been molesting children and lies about it should not be denaturalized.

INGRAHAM: John, we are almost out of time, but I did a little immigration law in my old days. And just because you have a green card doesn’t mean it’s a free pass that you can stay in the United States forever. You can get denaturalized if you have lied in the process, if you’ve committed fraud in the process. That’s U.S. law. The ACLU might not like U.S. law, but that’s just the way it is. I don’t know what they want. The question is how these people ever became citizens in the first place. I imagine a lot of them are from chain migration, correct?

BASH: Well, they come all different ways. Some of them are people who might have lied about being a family member, but a lot of people come here as refugees but then lie about the fact that the very conflict they are fleeing from, they were the war criminal in that conflict.

And the other thing the ACLU leaves out is we have to prove almost beyond a reasonable doubt to a judge’s satisfaction this person never should have been a U.S. citizen. So there’s all sorts of procedural protections in place to avoid discrimination or unfair treatment in this process.

INGRAHAM: You have a high hurdle to clear. John, thank you for what you’re doing in Mexico City. We really appreciate you joining us exclusively tonight.