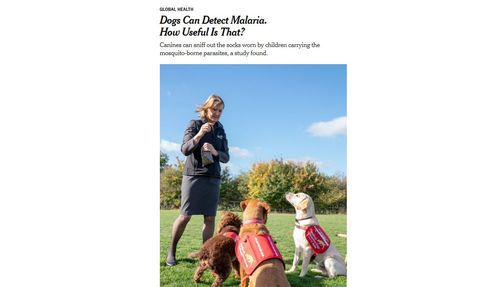 "Dogs Can Detect Malaria. How Useful Is That?"

An update on a theme that has long fascinated me. From the NYT:

Dogs Can Detect Malaria. How Useful Is That?

Canines can sniff out the socks worn by children carrying the mosquito-borne parasites, a study found.

More accurately, dogs may be able to do this. The pilot study only involved two dogs.

… In itself, such canine prowess is not surprising. Since 2004, dogs have shown that they can detect bladder cancer in urine samples, lung cancer in breath samples and ovarian cancer in blood samples.

Trained dogs now warn owners with diabetes when their blood sugar has dropped dangerously low and owners with epilepsy when they are on the verge of a seizure. Other dogs are being taught to detect Parkinson’s disease years before symptoms appear.

The new study, its authors said, does not mean that dogs will replace laboratories. Inexpensive rapid tests for malaria have been available for over a decade; more than 200 million people in dozens of countries are infected each year.

But for sorting through crowds, malaria-sniffing dogs could potentially be very useful.

Some countries and regions that have eliminated the disease share heavily trafficked borders with others that have not. For example, South Africa, Sri Lanka and the island of Zanzibar have no cases but get streams of visitors from Mozambique, India and mainland Tanzania.

And when a region is close to eliminating malaria, dogs could sweep through villages, nosing out silent carriers — people who are not ill but have parasites in their blood that mosquitoes could pass on to others.

Dog noses are 10,000 to 100,000 times as sensitive as human noses. Scientists are not sure exactly what dogs are smelling, but it is known that malaria parasites produce volatile aldehydes like those found in perfumes.

The parasites may have evolved the ability to exude odoriferous chemicals in order to attract mosquitoes to carry them to new hosts. Studies have shown that mosquitoes prefer to bite people who have malaria.

If just one chemical indicated cancer or malaria, “we’d have discovered it by now,” said Claire Guest, who founded Medical Detection Dogs in 2008 and oversaw dog training in the study. “It’s more like a tune of many notes, and the dogs can pick it up.”

Most breeds have good noses, she said, but the best for this task are dogs bred to hunt — like pointers, spaniels and Labradors — and dogs with relaxed relationships with their owners.

I’ve never heard about anybody trying to create a new breed optimized for this type of skill. It would seem like the kind of idea that would have instantly occurred to top people in, say, Darwin’s time, but doesn’t seem to come up much now.

We have existing breeds with remarkable innate tendencies — like the powerful Newfoundland dog that will try to save anybody who looks like he might be drowning. But most dog breeding energies in recent decades seem oriented toward the aesthetic rather than the functional.

And perhaps the kind of far-seeing individuals who in the past created outstanding new breeds are now turned off by the kind of cruelty inherent in the process of culling puppies that don’t exhibit the desired trait, and thus avoid dog breeding.

In 19th Century Britain, elites tended to live in country at least part of the year and have deep ties to the agricultural economy. The coming of railroads allowed people to get from city to country house and from country house to country house quickly, allowing a cultural efflorescence where people could gather face to face like in urban centers and yet still have room for non-urban pursuits: e.g., animal breeding, standardizing sports, the theory of evolution, etc.