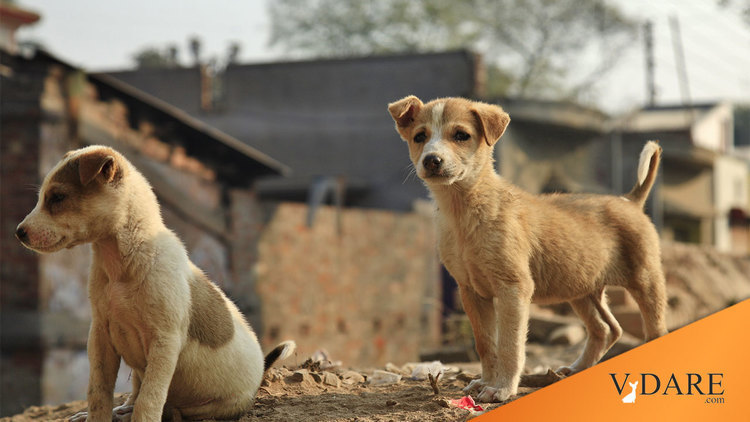 Some of the most prevalent Dumb Ideas about Race that crystallized as conventional wisdom around the time of Bill Clinton's celebration ceremony for the Human Genome Project revolve around the idea that genetic differences couldn't possibly cause differing behavioral tendencies among the races because we're all 99.999% (insert as many "9s" as you feel necessary to make the point) the same!

Spaniels have notably floppy ears, basset hounds have extremely short legs, and St. Bernards are large and big boned. Not to mention Chihuahuas.

Humans have bred dogs to produce tremendous variety. But a new study reports that the physical variance among dog breeds is determined by differences in only about seven genetic regions.

These seven locations in the dog genome explain about 80 percent of the differences in height and weight among breeds, said Carlos Bustamante, a geneticist at Stanford University and one of the study’s authors. The findings, published in Public Library of Science-Biology, are a result of what is the largest genotyping of dogs to date, involving more than 1,000 dogs and 80 breeds.

So, in the big picture, Labrador retrievers and pit bulls don't actually differ very much genetically. They do differ genetically on a very small number of genes. But some of those few genes that differ are related to biting. Labs tend to retract their teeth and gum whatever they're handling with their mouths, while pit bulls tend to bite down and, more unusually, not let go while they whip their heads back and forth. So, that tiny, tiny fraction of the dog genome is important when deciding which breed of dog to buy depending on your needs — e.g., pet for your toddlers or guard dog for your crack stash.

The great thing about Malcolm is that he lacks the Uh-Oh-Let's-Not-Go-There gene that makes most spouters of the conventional wisdom prudently change the subject when they find that the logic of their argument has carried them to the edge of reductio ad absurdum.