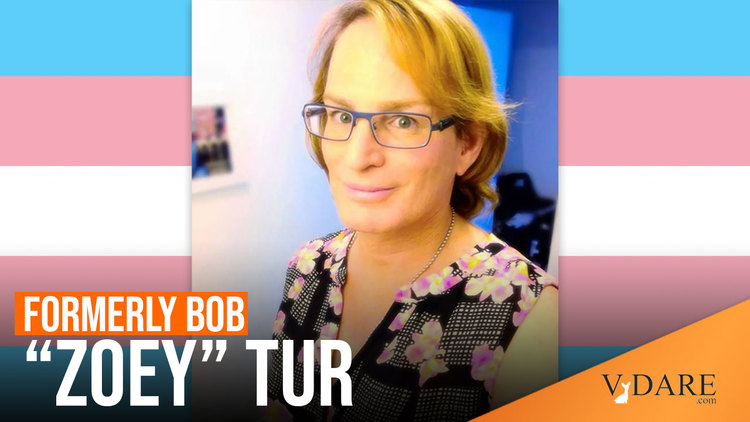 Do Ex-Men Tend To Be Victims Or Jerks?

‘You gotta be kidding me’: MSNBC anchor Katy Tur reveals her reaction when her ‘abusive’ father Zoey Tur told her he was transgender in 2013 – as her parent admits to being violent and apologizes

… The 38-year-old recounted the 2013 call that caused the rift between her and her now-estranged father, who has never met her two children

‘My dad said, ”I am a woman.’ And I said ”What?” And my dad said, ”I’m a woman, I’m transitioning, I’m going to become a woman,” Katy told CBS Sunday Morning
‘And I remember being at first puzzled and saying, ”You gotta be joking. You’re kidding, what are you talking about?”’

By ANDREA BLANCO FOR DAILYMAIL.COM

MSNBC anchor Katy Tur has opened up about her reaction when her legendary broadcaster father came out as transgender to her almost a decade ago.

… The MSNBC anchor also accused her father of throwing batteries at her, her brother and mother, and punching walls when she was growing up.

Katy said her father confessed to her during the call that her volatility and violence during the turbulent marriage with Gerrard stemmed from Zoey not being able to be her true self.

He was always a little girl chopper pilot on the inside.

Speaking of women and helicopters, the guy I went to MBA school with who is now America’s “highest paid female CEO” has lately invented an electric helicopter and had it set records for longest battery-only flight. Like I said, the man is a hero straight out of a Robert Heinlein sci-fi novel.

Zoey, who is famously known for covering the 92′ LA riots and the infamous OJ Simpson low-speed chase from the sky, acknowledged that working in the demanding journalism industry had affected her behavior at home.

‘She [Katy] really looked up to me, and I failed her. No father wants to fail their daughter … Throwing batteries? Probably, yeah. Punching walls? There were a couple,’ she told CBS.

… Katy, who went on to become an award-winning journalist of her own right, told CBS she was puzzled when she received a call from her father in 2013, the last time she spoke with her.

‘And my dad was adamant. ”I’m the wrong person. I’m going to become the right person. Don’t you see? This is why I’ve been so angry.” And it was really just, it was a lot,’ Katy said.

Zoey had previously said that Katy has not spoken to her since she made the decision to transition.

Zoey has also said in the past that she does not consider Katy as ‘transphobic.’

‘It’s that her hero father has become this. And it’s the fear of not fitting in. It’s the pressure of being on network television. It’s the conservatism that she’s forced to endure,’ she told The Hollywood Reporter in 2016.

Speaking of science fiction, Ray Blanchard of the U. of Toronto coined the term “autogynephilia” back in the 1980s to provide a scientific word for the heterosexual narcissistic fetish of a man who is sexually excited over the thought of himself as a beautiful woman. Autogynephilics hate the term because it tends to make the rest of the world laugh too hard to agree to be drafted into validating their sex fantasy. And thus the ex-men have turned their peculiarly male ferocity on those who mention that they probably aren’t really girls on the inside.

The Wachowskis and the evolving media coverage of transgender people
By Alyssa Rosenberg
Columnist
March 17, 2016 at 9:00 a.m. EDT

In 2012, the movie director Lana Wachowski publicly came out as transgender during the press tour for “Cloud Atlas” and in a speech accepting the Human Rights Campaign’s Visibility Award. And last week, her sibling, Lilly Wachowski, also came out as transgender to preempt inquiries from the Daily Mail, which was pursuing the story that Lilly, who had formerly gone by the name Andy, had also transitioned.

It’s notable that both of the Wachowskis are transgender, and that their transitions immediately make them two of the most high-profile female directors in Hollywood. And Lilly’s coming-out also provides an opportune moment to look at how media coverage of transgender people has changed over the past decade.

Lana’s announcement comes shortly after the ten-year anniversary of a piece in Rolling Stone that provides a horrifying benchmark for just how far the mainstream media has evolved in its practices. Titled “The Mystery of Larry Wachowski” — the name Lana was known by publicly prior to her coming-out — the piece suggested that Lana’s transition was a form of sexual fetishism; the opening scene in the piece involves Lana visiting a Los Angeles sex club where “friends say, he liked engaging in his pastime while dressed like a woman.” It also implies that Lana’s sex life and gender identity contributed to “one of the most widely derided sequences in recent movie history,” the rave sequence from “The Matrix Reloaded.”

“Psychiatrists disagree about what forces are at work in men who cross-dress and take the ultimate step of having gender-reassignment surgery,” the piece continued. “One camp considers men of this type to have a ‘gender-identity disorder,’ to be ‘women trapped in men’s bodies.’ In recent years, another group of doctors labeled some men who demonstrate these tendencies to be autogynephiles — straight men who are essentially sexual fetishists, aroused by the thought or image of themselves as women.”

Notably, the author goes on to discuss and diagnose Lana Wachowski as the latter without providing any more context about gender dysmorphia. And in a uniquely gratuitous thread, the piece quotes a number of unflattering comments sources made about Lana’s physical appearance and gender presentation. The tone of the piece is consistent throughout: whatever is going on with Wachowski, and whatever prompted her withdrawal from public life, the reader is meant to think it’s weird and transgressive.

The journalist punched down at the poor oppressed Wachowski Siblings. How dare anyone wonder if their fetishes have contributed to their remarkable string of lousy movies that has made them 0-for the-21st Century. They are transgender and therefore they cannot be questioned.

“The Mystery of Larry Wachowski” is the sort of piece that would be greeted with outrage today, and in fact, it is no longer available on Rolling Stone’s website, though it lives on in various Internet forums (thus the reason I am not linking to it). … And just because media coverage of transgender people has improved — from reality programming like “I Am Jazz” to Caitlyn Jenner’s carefully-choreographed Vanity Fair cover

Improved, I tell you, improved.

— doesn’t mean that the material realities many transgender people face have improved in a comparable way.

For example, the Wachowski Sisters are being paid only 7 digits to direct their movies while the Wachowski Brothers got 8 digits.