Michael Barone has written a nice article about the assault on higher edcation by the diversity bureaucrats, as if “inclusion” were the job of the university rather than education.

But the piece would have been improved by the inclusion of some dollar signs showing what all this diversity really costs.

Following is a jaw-dropper that I’ve been saving, where the taxpayer cost of a deluxe diversity office at UC Berkeley is mentioned in the fine print in a bio paragraph about a professional diversocrat:

My 30 years as a professor in the Department of Astronomy at the University of California, Berkeley, has given me a comprehensive perspective about the needs and desires of the students, faculty, and staff on this campus. With shifts in state policies and economic challenges over the past few decades, I have shared mounting concerns about the ability of this university to continue to reflect the rich diversity of California and the nation. In 2007, Chancellor Robert J. Birgeneau, with the support of campus leadership, launched an entirely new division—the Division of Equity & Inclusion—to address these concerns as never before.
[. . .]

Dr. Gibor Basri is the vice chancellor for equity and inclusion at the University of California, Berkeley, overseeing a staff of approximately 150 and a $17-million budget. His responsibilities include working with faculty, staff, and students on strategic planning and fundraising for UC Berkeley’s Initiative for Equity, Inclusion, and Diversity and to carry out other key programs. An expert in “brown dwarves,” stars that cool down to planetary temperatures, Basri is an astrophysicist, who has taught at Berkeley for 25 years.


Here in California, the chronic budget problems have caused a chainsaw to be taken to the state’s once excellent university system.

But UC Berkeley spends $17 million yearly on a diversity program when there seems to be plenty of diversity on campus already. In fall 2011, the freshman enrollment was only 27.1 percent white. 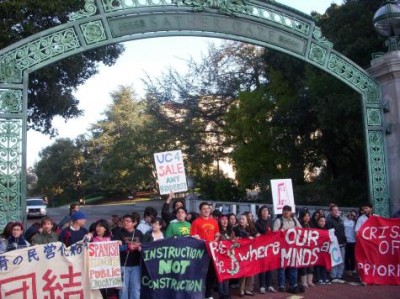 Now on to Barone:

How many times have you heard Barack Obama talk about “investing” in education? Quite a few, if you’ve been listening to the president at all.

In fact Americans have been investing more and more in education over the years, led by presidents Democratic and Republican. But it’s become glaringly clear that we’re getting pretty lousy return on these investments.

That’s been evident at the K-12 level for a long time. Teacher unions and education-school types have had custody of most of our public schools for more than three decades, during which test results and high school graduation rates have been mostly stagnant.

Obama’s education secretary, Arne Duncan, deserves credit for doing a bit of this as well. All this, despite the fact that teacher unions funnel millions of taxpayer-funded dollars into Democratic campaigns.

On higher education Democrats and many Republicans as well have followed the same course as on public schools: Shovel in more money, in this case in the form of Pell Grants and subsidized student loans.

College and university administrators have been happy to scoop up all the money by rapidly raising tuitions and fees. Higher-ed expenses have been rising much more rapidly than inflation for three decades.

And what has the money been spent on? Some of it presumably goes to professors in the hard sciences and the great scholars who have made American universities the best in the world. Well and good.

But many university administrators have other priorities. The University of California system has been raising tuitions and cutting departments. But, reports John Leo in the invaluable Minding the Campus blog, its San Diego campus found the money to create a new post of “vice chancellor for equity, diversity and inclusion.”

That’s in addition to what the Manhattan Institute’s Heather Mac Donald calls its “already massive diversity apparatus.” It takes Mac Donald 103 words just to list the titles of UCSD’s diversitycrats.

The money for the new vice chancellorship could have supported two of the three cancer researchers that the campus lost to Rice University in Houston, a private school that apparently takes the strange view that hard science is more important than diversity facilitators.

This doesn’t just happen on the Left Coast. The University of North Carolina at Wilmington saved some money by lumping together two science departments and raised spending on its five diversity-multicultural offices.

But, to quote George W. Bush, is our students learning? Not very much, concludes the California Association of Scholars in its 87-page study of the University of California system.

Students aren’t required to study American history or Western civilization. But they’re subjected to a lot of political indoctrination by leftist activists. “Far too many” have not learned to write effectively to read “a reasonably complex book.”

“In recent years, study after study has found that a college education no longer does what it once did and should do,” the report concludes. “Students are being asked to pay considerably more and get considerably less.”

That’s the sort of thing that happens when you pump money into an insular system and don’t hold its leaders accountable for results.

Many politicians’ instinctive response is to pump in more money. But if you’re stuck in a hole, it’s a good idea to quit digging.

Millions of young Americans are living with the results. In a time of economic stagnation, the degrees they’ve earned haven’t equipped them with basic work skills, much less expert knowledge that can command a premium even in a sluggish market.

And they’re saddled with tens of thousands of dollars of student loan debt, which — darn it! — turns out not to be dischargeable in bankruptcy. They can get by on partial payments for a while, but interest keeps accumulating, to the point that Social Security checks may get dunned to pay for college.

Glenn Reynolds, proprietor of instapundit.com and a law professor at the University of Tennessee, says we’re watching a higher education bubble that’s just about to pop. That’s what happens when you throw a lot of money at college and university administrators who don’t have much common sense.