The country of Afghanistan has been rated as the worst place on earth for women, and with good reason, given that the culture is primitive even for Muslim sharia-run societies. 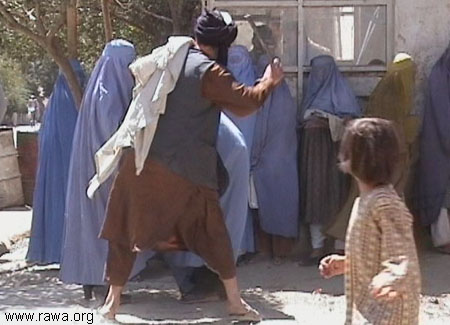 Today’s example is a video of a woman being shot to death by her father at the order of the local imam last April. The locals viewing the execution cheered loudly with laughing and Allah Ackbars. Everybody (with one exception) appeared to have a great time at the event.

Here’s a bit of the transcript:

A woman accused of adultery is about to be executed in public, and the neighbors have gathered to watch.

A mullah blames the current drought on the woman and her bad behavior:

“You can see for yourselves why it doesn’t rain.

What is the main reason?

The murders, the adulteries, and our bad deeds.”

Pretty backward stuff, no doubt. But Afghan immigrants don’t bring that cultural misogyny to this country, do they?

Actually, all immigrants retain their cultural baggage to a large degree, because it’s human nature to be strongly imprinted by the society in which we are raised. Even the New York Times has noticed:

[. . .] In Afghanistan, a decade after the overthrow of the Taliban and the rise of an influential women’s rights movement, the violent subjugation of women remains broadly accepted. In recent weeks, the Afghan government has sharply criticized the country’s shelters for battered women and moved to take control of them.

But much more quietly, a culture of domestic violence — not only by husbands but also by husbands’ families — has followed Afghan immigrants to destinations like New York, where women’s advocates say they are now discovering just how widespread the problem is. [. . .]

Is this the sort of diversity America should be importing willy-nilly? Muslim immigration is a very bad idea for many reasons and should be ended.