Today is International Women's Day and it is a fine occasion to observe how truly rotten many cultures are. In many places, the idea that women are people with rights, dignity and aspirations has made no inroads whatsoever. From the crude Burqastans across the Islamic world to the more genteel misogyny of upwardly mobile India and China, very little has changed for women in those societies; while in the West, women have been allowed to reach their potentials, and everyone benefits.

Nothing illustrates the intellectual bankruptcy of the ideology of multiculturalism — the idea that all cultures are morally equal — than the actual lives that women lead in many of the third-word sewers we are supposed to celebrate.

If that's not bad enough, they are coming here, bringing their crappy cultures that don't have the wit to survive without actual slavery and other sorts of oppression built into the family structure. Yep, and Washington welcomes some of the worst human rights abuses on earth under the spawn-of-satan program that just won't die, the Diversity Visa scam.

Consider the dreary list compiled by the Toronto Star in honor of today's festivities, er observances, in the article Ten worst countries for women. Criminal abuse (such as the felony torture known as female genital mutilation, FGM) throughout an entire society (e.g. Sudan) is no impediment to receiving the much-prized US visa, nor is plain old cultural inappropriateness.

Here are a few bulleted items taken from the Star's list, with the number of Diversity Visas awarded by the State Department for the year 2008 noted in [brackets]. Of course, every other category of immigration is going gangbusters also.

Do-gooders might argue that America is being virtuous by at least rescuing a handful of oppressed women. But the numbers don't work: with several billion people living in third-world piggy zones, multicultural immigration policies are only succeeding in bringing foreign social pathology here.

For example, notice anything odd about this street scene in the "Little Pakistan" area of Brooklyn? Is one gender missing perhaps? How many random photos of any US shopping district would show zero women and a dozen males? (From More Muslims Arrive in U.S., After 9/11 Dip, New York Times, Sept 10, 2006) 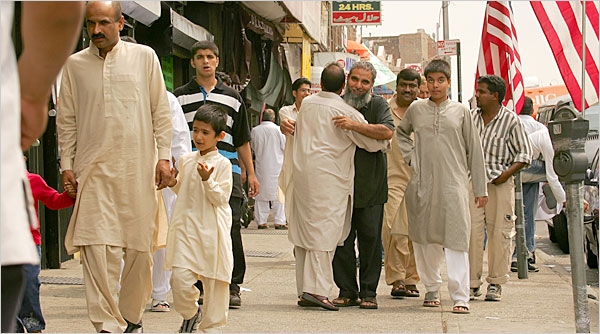 Sorry, but these cultures are too diverse for me. They can stay home and pursue their anti-women folkways out of my country.