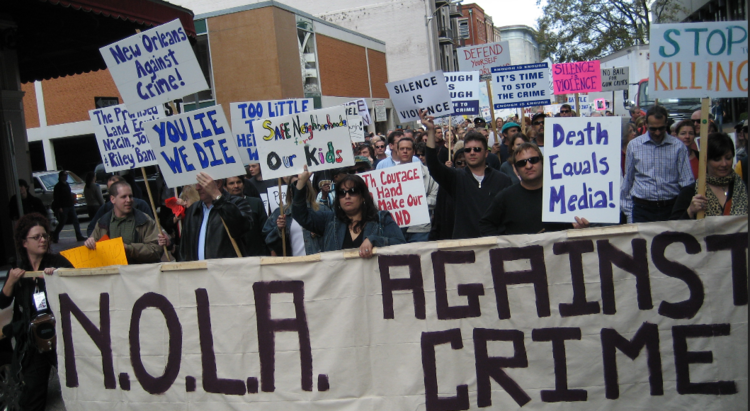 Diversitopia, U.S.A.: If New Orleans were a Country, It Would Have the World’s Second Highest Murder Rate

As for New Orleans, I guess Nicole Gelinas was wrong when she said that NOLA knew how to do recovery right. But that was after she got the memo. (Here she is in her glory, before she got the memo.)

A note to readers, regarding murder rates around the world. Garth Kant maintains, linking to a graphic from Richard Florida, that South Africa has a murder rate of 17 per 100,000. That official number is surely a fraction of South Africa’s real murder rate. Approximately 10 years ago, the country was the world’s murder capital; since then, the authorities have more or less stopped keeping any sort of credible records.

Those pushing President Obama’s gun-control agenda often portray the United States as one of the murder hot spots of the world, but the numbers tell a different story.

Even more revealing, gun murders in the U.S. are concentrated in big cities that typically have the strictest gun-control regulations. And it is those cities’ gun murder rates that are comparable to the rates in some of the deadliest countries in the world.

And [only!] 89 countries have higher murder rates than the U.S.

The statistics on gun murders shed even more light.

The U.S. may have the highest level of gun ownership in the world, but its rate of gun homicides is only about three per 100,000.

Gun homicides in the United States are concentrated in major urban areas. And those cities, typically Democratic strongholds with the most stringent gun control laws in the nation, have gun murder rates that rival those of the most violent countries in the world.

Click here to see a map comparing the rate of gun murders in American cities to nations around the world. It uses data from the Centers for Disease Control and Prevention, the United Nations Office on Drugs and Crime and other sources collated by The Guardian.

The data reveal these amazing comparisons:

New York, where gun murders have declined to just four per 100,000, is still higher than Argentina (3).

Even the cities with the lowest homicide rates by American standards, like San Jose and Austin, compare to Albania and Cambodia, respectively.

It’s true those comparisons are American cities to nations. But most of the countries listed have relatively small populations, in many cases comparable to large U.S. metros.

Here’s a look at the gun-control laws in the five U.S. cities with the highest gun-murder rates.

In New Orleans, you have to apply to the state police office and take classes with the National Rifle Association, then wait 45-90 days to get a concealed weapons permit.

Detroit comes under tough state laws that require a multistage process to get a gun. First, you must pass the Michigan Basic Pistol Safety questionnaire. Then you have to apply for the Ten Day Handgun Purchase Permit. (If you don’t buy the exact gun you applied for, you have to start the process all over.) After buying the gun, you have to fill out a Michigan Pistol Sales Record form and make sure the pistol has a valid firearm Safety Inspection Certificate. Federal laws also require a background check if you purchase a gun from a licensed dealer with a Federal Firearms License.

Maryland law governs Baltimore gun owners. The state prohibits the sale of handguns and many high-powered weapons without background checks. Magazines that hold more than 20 rounds are illegal.

Newark is in a state that already has some of the strictest gun control laws in the nation, and they may get stricter. The New Jersey state assembly passed a series of measures on February 21. One bill would limit the size of magazines to 10 shells from the current 15. Others would outlaw .50 caliber weapons, create weapon-free school zones, require background checks for private gun sales and require safety training for people seeking firearm purchase permits. The state Senate and Gov. Chris Christie would have to approve the changes.

Firearms-rights supporters point to the high rates of gun murders where tight gun-control laws are in effect. Dave Workman of the Second Amendment Foundation says the belief in the firearms community is those laws mean people simply can’t protect themselves and criminals know it.

He says, “Criminals realize victims are far less likely to fight back. There’s no deterrent factor.”

Gun-control measures proposed by President Obama in January could reduce that deterrent factor even more.