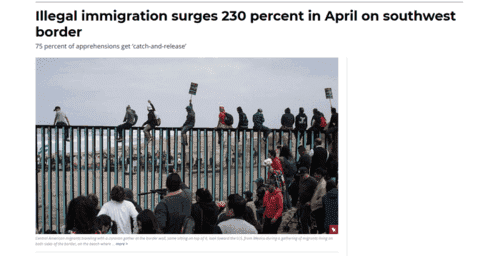 Dinan Of The WASHINGTON TIMES: Illegal Immigration On The Border Surging, “Catch And Release” Continues. Has The Trump Effect Worn Off?

Stephen Dinan of the Washington Times reports that

Illegal immigration along U.S.-Mexico border surged 230 percent in April compared to last year, according to new numbers released Thursday that experts said expose major loopholes in American immigration law. Chief among the loopholes is the de facto “catch-and-release” policy that sees most illegal immigrants caught at the border quickly put back out on the streets, with the hope that they’ll return to be deported later. Perhaps 75 percent of all migrants caught by Border Patrol agents are given catch and release, said Brandon Judd, president of the National Border Patrol Council, which represents line agents. Knowing they’ll be released rather than quickly deported has served as an enticement for more illegal immigrants to make the journey, he said. “The reason is obvious: If you can cross the border illegally without any consequence, why not? As long as the catch-and-release policy-program exists, large numbers of people are going to cross the border illegally,” said Brandon Judd, president of the National Border Patrol Council.

This doesn’t sound good at all.

April’s numbers continue a months-long trend of worsening illegal immigration. The Border Patrol says it nabbed 38,234 illegal immigrants during the month, while Customs and Border Protection Officers encountered 12,690 more people who tried to come through the official ports of entry without permission. That makes for the worst month since President Trump took office.

Dinan compares this April’s figures with those of a year previous.

It’s also a huge turnaround from last year at this time, when the new president’s get-tough rhetoric sparked a massive drop. In April 2017, Border Patrol agents nabbed just 11,1129 people, and CBP officers encountered 4,646 others. Mr. Trump has repeatedly bragged about those early figures, and Democrats have also seized on them, saying the border situation was essentially solved. The latest numbers suggest that’s far from the case, however, with totals now back to where they were during the Obama era.

Has the Trump effect worn off?

“In 2017 and due to the rhetoric we had fewer apprehensions than any year in the past 45 years. It was simply because people believed that if they crossed the border illegally they would be held until their deportation hearing,” Mr. Judd said. But, he added, that didn’t end up happening. “Smugglers quickly realized everything was status quo, and they’re once again recruiting people to enter our country illegally,” he said.

Illegal immigrant children traveling alone, and families traveling together, are a particular target for the smugglers, who assure the migrants they can win a foothold in the U.S. Officials say it’s so bad that some illegal immigrants have taken to kidnapping or “borrowing” children en route to the U.S. so they can pose as a family and get more lenient treatment. More than a third of those caught by Border Patrol agents in April were Unaccompanied Alien Children (UAC) or families, while for CBP officers the rate has soared to more than 50 percent. Children and families are two groups that particularly benefit from catch-and-release, thanks to court rulings that have set strict limits on how long children can be held in detention. Releasing them virtually guarantees they don’t show up for their deportations, security experts say.

Well, duh. You let them go and they usually don’t show up. Why do we do this?

Still other rank-and-file illegal immigrants are also processed and released if there’s not enough detention space in the system to hold them. Mr. Judd said that leads to the 75 percent catch-and-release figure. Given the more than 38,000 migrants agents apprehended last month, that would mean more than 28,500 of them are likely to be quickly released.

So what does the Administration have to say about all this? What does your Senator or representative say about it?

Administration officials have acknowledged the problems. They say they’ve ended “administrative catch and release,” which means they no longer have an official policy calling for some classes of illegal immigrants to be released automatically. But they said a lack of detention bed space and demands set by federal courts still force catch-and-release for many illegal immigrants.

Once again, “federal courts” are involved.

For example, in the case of a mother and child caught at the border, a court order generally limits Homeland Security to 20 days’ detention. That’s usually too short a time to complete their deportation case, so they are released with the hope they return for their deportation hearings later. That hope is often frustrated.

It’s absolutely ridiculous, to limit that to 20 days. It’s practically a guarantee of release.

CBP didn’t respond to a request for comment on the new numbers, which come even as the border agency is dealing with the illegal immigrant caravan. Mr. Trump, asked about the caravan and border security in a press conference earlier this week, said Congress needs to step up and fix the matter. “We need a change in the law. Catch and release is ridiculous. If they touch our property, if they touch our country, essentially, you catch them and you release them into our country. That’s not acceptable to anybody,” he said.

Trump needs to keep pounding the drum on this.

Homeland Security Secretary Kirstjen Nielsen echoed that call in testimony to Congress last week, where she pleaded for Congress to write laws giving her department the ability to hold people. “If you have an alarm in your home and you catch a burglar and you call the police and the police come, and in fact it is an illegal entry into your home. But the police then tell you that they have absolutely no ability to detain or remove those criminals and the criminals stay in your house, you would not tell me that is home security. That is what we face at the border,” she said. “We stop people, we interdict them, but we do not have the authority given the loopholes in many cases to detain and remove them. We are forced to release them back into the communities after they have committed crimes,” she said.

Everybody, however, is not against such laws.

But Democrats have resisted those calls for change, objecting to her description of the law as “loopholes.” “These laws aren’t loopholes. I know because I helped write them,” Sen. Dianne Feinstein, California Democrat, said earlier this week. “They merely guarantee that children will be treated humanely — not detained indefinitely — and have the right to seek asylum or other immigration relief available under existing law. The Trump administration shouldn’t be using families and children fleeing violence as political bargaining chips to roll back critical protections for children.”

Such laws need to be changed. Why doesn’t Trump have a high-profile meeting with congressional leaders, and if they drag their feet, pound the bully pulpit over the issue.

The number of illegal immigrants caught attempting to jump the border is considered a rough yardstick for the overall flow of illegal immigration across the border. Mr. Judd said it’s impossible to know exactly how many people evade detection, but agents figure they are between 50 percent and 60 percent effective. “If that is the case, and being an agent myself, I can say it is, then the numbers become staggering,” he said.

The Trump Administration needs to put this on the front burner and get with it.