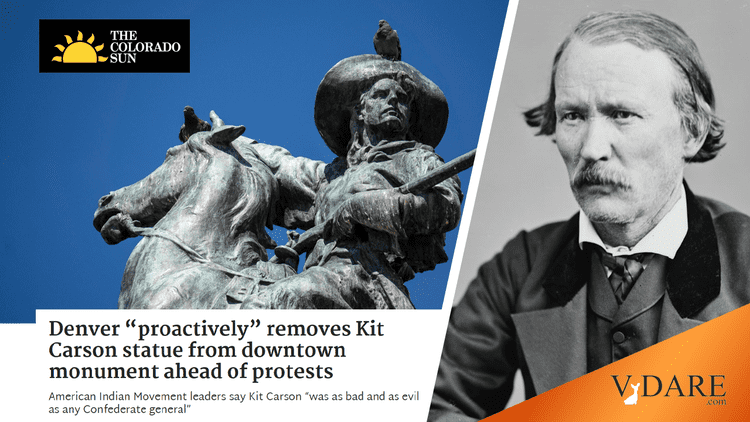 It’s happening so fast few dare speak out, because no one has the words to accurately articulate the scope of the devastation. The acts of pure anti-white animosity.

Manifest Destiny has been supplanted. The rule of Black-Run America (BRA) is washing away the civilization our ancestors built out of the wilderness on this continent.

The Kit Carson portion of the Pioneer Monument at Colfax Avenue and Broadway was removed by Denver city crews on Friday afternoon. It’s the latest statue to be dismantled in Denver, the others were toppled by protesters.

One man at the corner of Broadway and Colfax in Denver shouted, “If they don’t do it, I will!”

Christopher “Kit” Carson, once married to an indigenous woman, later became known for
his actions under Union orders during the Civil War against numerous tribes.

Tessa McLean, speaking for the American Indian Movement, told CBS4’s Rick Sallinger, “The Kit Carson statue to us represents genocide. He was an Indian killer.”

Scott Gilmore of the City of Denver Parks and Recreation Department said, “We decided it would be best instead of people sneaking out at night and trying to pull it down we’d be more proactive and remove the statue.”

On Thursday the American Indian Movement of Colorado sent a letter to Denver leaders calling for the removal of “two racist, anti-Indian icons: the plaque honoring Christopher Columbus in Civic Center Park and the Pioneer Fountain monument at the corner of Colfax and Broadway streets.”

“The historical moment has arrived for Denver to find the moral courage to begin the process of removal of these vicious and divisive monuments to invasion and colonialism. The removal of these statues will only begin the discussion of the remediation of the history of anti-blackness and anti-indigeneity in Denver, which is epitomized by the ongoing tribute to the African slave-trading, Indian-murdering Christopher Columbus,” the group said in a statement.

The city did not have a chance to remove the Columbus one first. Several people using ropes were seen in a phone video taking down the statue during the night. At daybreak Friday the 15-foot bronze statue was over on its side and on the ground. While it does not depict Columbus there is a plaque referring to him as an Italian visionary and great explorer.

Carl Huey a bystander said, “This is appalling it’s unjust and it’s inept we just don’t need it.”

Columbus was accused of torture and mutilation of his colonial subjects.

Gilmore, with the city, was there too, to survey what happened, “we were hoping we could pull the plaque off and we could bring people together to discuss the issue.”

This week, a Civil War statue in front of the Colorado State Capitol was toppled and damaged, presumably for its reference to the Sand Creek massacre of indigenous people. The statue and its base have been repeatedly vandalized since the George Floyd death protests began in Denver.

Gov. Jared Polis has indicated it will be repaired and replaced because it honored those who fought to end slavery. As for the Pioneer Monument statue of Kit Carson, Mayor Michael Hancock has formed a commission to examine all controversial names within the City of Denver.

The Pioneer Monument with Kit Carson was created by artist Frederick MacMonnies and was erected in 1911.

[the monument is described as]

Bronze figures of The Hunter, The Prospector, The Pioneer Mother and Child, designed by the artist.

Initially conceived in 1905 by members of the Denver Real Estate Exchange. They were supported by Mayor Speer, who promised a suitable site if the money for the statue was raised. The site chosen marks the end of the Smokey Hill Trail, which started in Abilene Kansas. Before the sculpture was erected, there was a pump house for the Denver Fire Department on the site.

It was never going to stop with tearing down statues/monuments or renaming streets/schools honoring Confederates or the Founding Fathers of this nation.

It’s a war on every last vestige of the history white men created on this continent and the civilization they alone birthed.

And so dies the future.