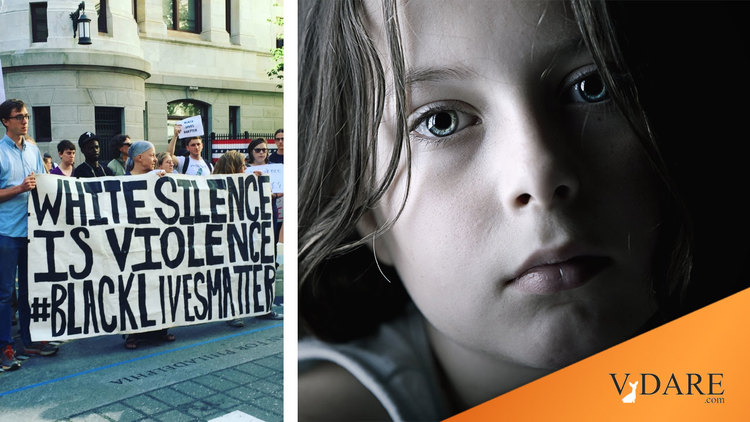 "Demonizing White People for Being Born" Is the Ultimate Goal of Anti-Racist Curriculum, Per Head of NYC Private School

From here on out, it’s 24/7/365 anti-white from our elite. It will be intense propaganda basically instilling the idea to white children, “why were you born when you carry the original sin of whiteness?”

“Why do you continue to exist?”

The head of a New York City private school that has been accused of indoctrinating students with progressive politics and “anti-racist” orthodoxy privately acknowledged that the school is guilty of “demonizing white people for being born,” according to audio from a conversation he had with a whistleblower teacher.

George Davison, the head of Grace Church School in Manhattan, told embattled teacher Paul Rossi in a March 2 recorded conversation that the school uses language that makes white students “feel less than, for nothing that they are personally responsible for.” He also said that “one of the things that’s going on a little too much” is the “attempt to link anybody who’s white to the perpetuation of white supremacy,” according to the recordings posted online.

“I also have grave doubts about some of the doctrinaire stuff that gets spouted at us, in the name of anti-racism,” Davison told Rossi, according to the recordings.

The conversation between Davison and Rossi was posted online this week by the Foundation Against Intolerance & Racism, or FAIR, a civil-rights organization that calls for a “common culture of fairness, understanding and humanity.” FAIR is supporting Rossi, a math teacher who was relieved of his duties at Grace for calling out the school for its “anti-racist” orthodoxy.

Attempts by National Review to reach Rossi and Davison on the phone Tuesday morning were not successful. A message for Grace’s school spokesman was not immediately returned.

Rossi laid out his concerns about the school’s social justice tactics in an essay he published in mid-April on former New York Times opinion editor Bari Weiss’s Substack account. Weiss is a member of the FAIR board of advisers.

“‘Antiracist’ training sounds righteous, but it is the opposite of truth in advertising,” Rossi wrote. “It requires teachers like myself to treat students differently on the basis of race.”

Some groups of students are assigned the “morally compromised status of ‘oppressor,’ based only on “immutable characteristics,” Rossi wrote in his essay. “In the meantime, dependency, resentment and moral superiority are cultivated in students considered ‘oppressed.’”

In his essay, Rossi said he questioned the school’s anti-racist orthodoxy during a “mandatory, whites-only student and faculty Zoom meeting” in February. When his questioning was shared outside of the forum, he said, he was accused by a school leader of causing “harm” to students.

“He informed me that I had created ‘dissonance for vulnerable and unformed thinkers’ and ‘neurological disturbance in students’ being and systems,’” Rossi wrote. “The school’s director of studies added that my remarks could even constitute harassment.”

Whiteness is the ultimate sin in 21st Century America, which should quickly help any rational person understand there exists no such thing as white privilege.