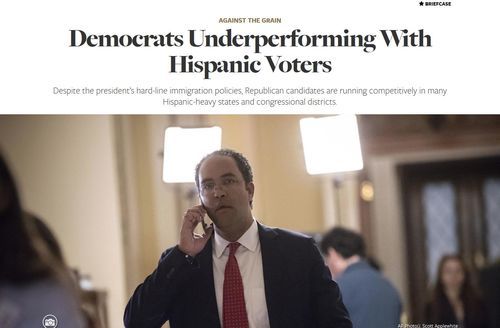 Despite the president’s hard-line immigration policies, Republican candidates are running competitively in many Hispanic-heavy states and congressional districts.

July 4, 2018, 6 p.m.
Democrats counting on President Trump’s hard-line immigration policies to spark energized Hispanic turnout and a wave against GOP candidates in this year’s midterms will be surprised to see what’s transpiring. Even during the heat of the family-separation crisis, Democrats are underperforming in heavily Hispanic constituencies, from GOP-held border battlegrounds in Texas to diversifying districts in Southern California to the nation’s most populous Senate battleground in Florida.

If immigration affects the battle for Congress, it will be because of the anti-Trump backlash among suburban women as much as any increased mobilization in the Hispanic communities. The early returns are a sobering reminder for Democrats that, even as the Republican Party is becoming a more nativist institution, GOP candidates are still holding their own in diverse battlegrounds by distinguishing themselves from Trump.