One eternal mystery is why liberals oppose trade deals that offshore US jobs to foreign nations while they ignore excessive immigration that has the same negative effect of Americans’ losing their employment. It has never made sense to me.

ED ROLLINS: The thing that needs to be discussed right up front is how many jobs it’s going to cost. It’s great to have rhetoric about the prices being lower, more jobs, all the rest of it — doesn’t ever seem to happen.

LOU DOBBS: We have never seen it happen. It is so much bull that is stacked so high — well, I don’t want to continue with the extraordinary metaphor.

Below, Shanghai is the world’s busiest port because Red China manufactures what Americans buy as a result of trade policies championed by transnational elites. The U.S. trade deficit with China soared to $342 billion in 2014. 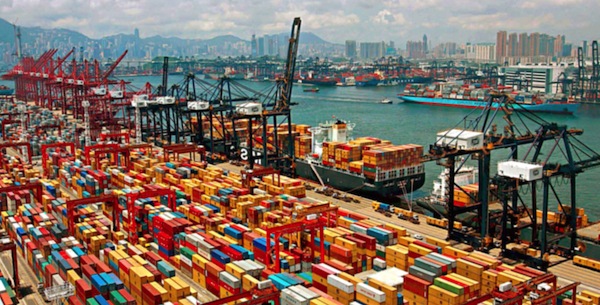 Labor is concerned, as it should be. Obama has been screwing his loyal labor constituents for years by opposing the Keystone pipeline. AFL-CIO President Richard Trumka recently promised to go “all out” to fight the President’s globalist trade agenda.

And if the deal is so great, why would it have to be negotiated behind closed doors? That’s the Democrats’ question of their Dear Leader.

House Democrats are criticizing President Obama’s administration for holding a classified briefing on trade with top administration officials, saying it’s an attempt to push a trade program in secret.

Members will be allowed to attend the briefing on the proposed trade pact with 12 Latin American and Asian countries with one staff member who possesses an “active Secret-level or high clearance” compliant with House security rules. Rep. Rosa DeLauro (D-Conn.) told The Hill that the administration is being “needlessly secretive.”

“Even now, when they are finally beginning to share details of the proposed deal with members of Congress, they are denying us the ability to consult with our staff or discuss details of the agreement with experts,” DeLauro told The Hill.

“Making it classified further ensures that, even if we accidentally learn something, we cannot share it. What is USTR working so hard to hide? What is the specific legal basis for all this senseless secrecy?” Doggett said to The Hill.

“Open trade should begin with open access,” Doggett said. “Members expected to vote on trade deals should be able to read the unredacted negotiating text.”

In an interview with The Hill earlier this year, House Minority Leader Nancy Pelosi (D-Calif.) said Obama could attract a lot of Democratic votes on trade — if handled in the right and “transparent” way.

It’s not unusual for the administration to discuss trade negotiations in classified meetings. Leaks of information can give trading partners an advantage in the talks, and could also tip off lobbying groups.

U.S. Trade Representative spokesman Matt McAlvanah told The Hill that the “administration has made and continues to make classified documents available to any member of Congress who is interested in reviewing them.”

“We have released public summaries of our negotiating objectives, and we are now embarking on a new series of briefings for members and their staffs that go above and beyond past practices,” he said.

An administration official said the briefing was classified because “these are sensitive, ongoing international negotiations.”

Senior Democratic aides representing pro-trade lawmakers vehemently pushed back against their party’s criticisms of the White House. One called the complaints “bizarre” and said, “It just makes no sense.”

“For some inexplicable reason, they seem to think that, by shutting down the only chance Congress has to shape the contours of trade agreements, that’ll lead to greater transparency,” the aide said.

Another senior Democratic aide said the briefing is classified because it’s “like a briefing on any international agreement — just like the Iran negotiations.”

“It’s impossible to go into the detail members are asking for in an unclassified setting,” the aide said.

But DeLauro argued the classified briefing “flies in the face” of past talks and hurts the administration’s credibility.

“If the TPP would be as good for American jobs as they claim, there should be nothing to hide,” she said.

One former Democratic Capitol Hill staffer said the administration has “made clear at every turn that they’re not interested in real transparency.”

“They have a very clear policy of withholding information, because they think secrecy is the only way to get the trade deal through Congress,” the former staffer said.

Treasury Secretary Jack Lew and Froman will address House Democrats Wednesday in a nonclassified briefing on currency manipulation, an issue that lawmakers on both sides of the aisle want addressed in the talks.

Larry Cohen, president of the Communications Workers of America, and James Hoffa, Teamsters president, will appear at the briefing, along with Jared Bernstein, a former economic adviser to Vice President Biden. They will discuss currency and labor’s broader concerns.

The Perez and Froman meeting will delve into TPP’s labor and investment chapters, as well as investor-state dispute resolution provisions.

Sen. Elizabeth Warren (D-Mass.) has raised concerns in recent weeks that those dispute provisions could be used to weaken U.S. law such as Dodd-Frank.

A source familiar with the meetings between the members and the administration said that any policies shown to members are not redacted.

Pelosi helped organize the briefings. The minority leader has been focused on finding a “path to yes” for House Democrats to support Obama on trade.