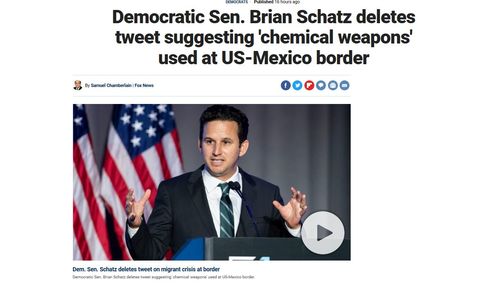 Democrats Aren't Pro-Open Borders, They Are Just Anti-Rule of Law

The migrants broke through the fence and were repelled with pepper spray smoke pellets. #MigrantCaravan pic.twitter.com/pC8dDFRfOy

Tear gas across the border against unarmed families is a new low.

Approximately 45 minutes later, Schatz tweeted: “Who gave the order? Did it implement or contravene policy?” He then tweeted “WHO GAVE THE ORDER?” in all caps.

Schatz then asked: “Why tear gas? Is this consistent with the Conventions on Chemical Weapons?”

However, the tweet was posted for just a few minutes before it was deleted and replaced by this message: “Anyone uncomfortable with spraying tear gas on children is welcome to join the coalition of the moral and the sane. We can argue about other stuff when we’ve got our country back.”

Senator Schatz is kind of an idiot. For example, earlier this year, former Attorney General Jeff Sessions mentioned in a speech to a sheriffs’ convention:

The office of sheriff is a critical part of the Anglo-American heritage of law enforcement.

Do you know anyone who says “Anglo-American heritage” in a sentence? What could possibly be the purpose of saying that other than to pit Americans against each other? For the chief law enforcement officer to use a dog whistle like that is appalling. Best NO vote I ever cast.