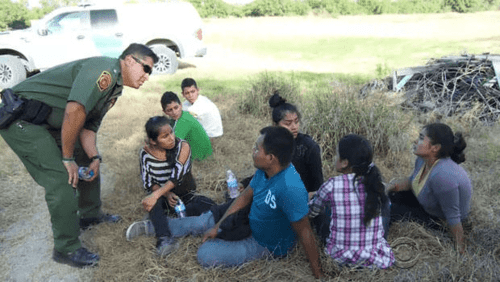 The GOP presidential field’s race to the right on immigration is grabbing all the attention. But over in the other nomination battle, Hillary Clinton, Bernie Sanders and Martin O’Malley are practically tripping over themselves sprinting in the other direction — vowing to go beyond even President Barack Obama’s executive actions that are already in legal jeopardy… All three candidates would open up parts of Obamacare to immigrants here illegally. And they’d all shut down controversial detention centers that have become a hallmark of the Obama administration’s enforcement policies.

This of course vindicates VDARE.com Editor Peter Brimelow’s assessment in Goodbye, Gompers—If Webb Can’t Focus Democrats On White Working Class, Nobody Can. The Democratic Establishment has consciously abandoned the white Blue Collar vote in favor of what Brimelow has called "Anti-America"—

In the process defending America’s border – to say nothing of  the Nation – has simply been junked.

This became apparent in their connivance in summer last year with Obama’s Kidinvasion ploy as I noted in Pelosi Stated Obamacrat Immigration Policy: Not Open Borders: NO Borders. GOP/AdelZuck Response: Zzzzz.

Also junked is any concept of Constitutional government with

Pledges…to broaden Obama’s executive actions to include an even bigger pool of undocumented immigrants.

Clinton pledged at a May roundtable in Las Vegas that she would go even further than Obama did, she specifically singled out parents of so-called DREAMers, who are young immigrants who came to the United States illegally. Parents of DREAMers were excluded from Obama’s executive actions, after Justice Department officials found that the president didn’t have the legal authority to offer the same protections to them.

Sanders formally released his own immigration plan this week. It includes a pledge to take executive action for all immigrants here illegally who have been in the United States for at least five years — an estimated 7 million people.

O’Malley rolled out his immigration platform in July, saying he would work to give deportation relief and work authorization to undocumented immigrants who would have been legalized under the now-moribund Senate comprehensive immigration reform bill in 2013

Apart from this Politico article, the radical nature of the shift in the Democratic stance has not been much reported – many Americans have probably not noticed.

It has been noticed in Central America, though, as reported in another unusually candid article More Central Americans fleeing violence to enter U.S., suggesting another major surge By Molly Hennessy-Fiske Los Angeles Times November 14, 2015. The volumes are staggering:

The number of families illegally crossing the southern U.S. border has more than doubled over the same period last fall…Many more unaccompanied children are also crossing, with 4,476 apprehended in September — an 85% increase over that month in 2014, according to new Border Patrol data…

Texas' Rio Grande Valley has been the epicenter of both the earlier and the latest influx. …The number of families who crossed this September was 5,273, more than twice the number seen in September 2014…

The Democratic Party has done a Merkel: encouraged a huge immivasion by indicating it will not be opposed.