The Opravda media has informed us that the Democratic National Convention set to re-coronate Barak Obama for a second term will be a celebration of diversity, with a special emphasis on women’s issues.

It’s curious then that the Dems are welcoming an unsavory bunch of Muslims, a tribe justly famous around the world for its crude sexism and how Muslim immigration reduces the freedom of women. The group is known as the Bureau of Indigenous Muslim Affairs (BIMA) and its website exhorts followers to attend the DNC for all the fun Islamic activities, like a mass prey-in, a fancy banquet and a cultural festival plus plenty of complaints about “Islamophobia” and focus on the “plight” of Muslims residing in meanie America. 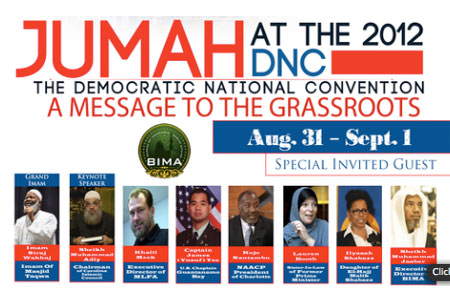 According to investigators who keep track of who’s who among the hostile Muslim community, we should be wary of leader Siraj Wahhaj, listed as an unindicted co-conspirator in the 1993 WTC bombing, and Jibril Hough, who has declared his allegiance to Islam and sharia over the US Constitution. These are not people who want to become assimilated members of the American community.

Terror expert Erick Stakelbeck explains in the video below that BIMA’s appearance at the DNC means to show domination of Islam over every other belief:

The same bunch under another name was responsible for the 2009 prey-in at the US capitol as a show of strength:

Zuhdi Jasser also finds BIMA’s welcome at the DNC to be disturbing, to say the least:

It is troubling that the Democratic National Convention has decided to promote and lend its name and national political platform to the organizers of the “Jummah at the DNC”. The leaders of this event – Jibril Hough and Imam Siraj Wahhaj as advertised are no moderates. They are radicals. These individuals embrace Islamist supremacy and have demonstrated support for radical ideologies.

A quick Google search by the DNC would have shown them that Hough and Wahhaj are leaders in the separatist American Islamist movement. While they may be able to get a few thousand Muslims to attend the event, they are NOT going to be mainstream Muslims. Most will likely come from Hough and Wahhaj’s radical networks that have long been entrenched in the Charlotte area. Make no mistake they are part of the Islamist movement.

This is not about their right of assembly; this group under a different name pulled the same stunt at the US capitol in 2009 claiming 20k and getting 2-3k. THIS IS ABOUT the DNC calling this an “official function” listing these radicals as typical of the DNC community and more importantly about this organization speaking out AS representing supposedly typical American Muslims (or “Mainstream”).

If that is who the DNC is consorting with then all Americans, Democrats should be concerned. There are many patriotic Muslims who are part of both parties, and when radical ideologues like this do a demonstration of “solidarity” in the name of our faith and choose an imam like Siraj Wahhaj who I saw with my own eyes in 1995 seditiously say it his duty and our duty as Muslims to replace the US Constitution with the Quran — then we need to speak up!

Their jummah (group) prayer is supposedly against the Patriot Act, the NYPD, and Islamophobia and is actually NOT about our democracy but about empowering their Islamist and MB sympathetic groups into the very fabric of the political system so that Americans become anesthetized. We need American Muslims to speak up and marginalize these radicals. The DNC needs to understand and reject them because of their radical history and ideas.

They use our American Muslim identity to speak as “one community” as a political unit or as a “bloc vote” – a political Islamist party when in fact most us Muslims don’t want that political unity and seek reform against their ideology that seeks to hijack our community. They do not represent us.

For more on Jibril Hough please review AIFD’s piece “Connecting the Dots of Islamism-Jibril Hough, the Islamic Political Party of America (IPPA), and the Jamaat al-Muslimeen (JAM)” or listen to Dr. Zuhdi Jasser’s March 8, 2010 interview on the Keith Larson show on WBT Charlotte. Jibril Hough phones in half way through.