The Constitution assures us Americans that we have the right to voice our opinions in public, but Muslims residing in this country don't believe the First Amendment applies when their religion is correctly criticized for its misogyny, brutality and rejection of reason.

Rev. Terry Jones of Georgia roused Islamic anger when he burned a Koran in March to register his disapproval regarding the Religion of Non-Peace.

It wasn't a very friendly thing to do, true, but Muslims have desecrated other religions with far more excess, such as the 2001 destruction of the Bamiyan Buddhas and the 2002 desecration of Bethlehem's Church of the Nativity. There is no shortage of Korans in the world, but those sacred places were unique.

Jones was roundly criticized from everyone from General Petraeus to Senator Lindsay Graham, mostly because Muslims would stir themselves into a fury and kill people in yet another thoughtless Islo-rage (remember the violence over Danish cartoons!). Which of course Muslims did, specifically in Afghanistan where several were murdered.

In mid-April, Rev. Jones was actually jailed by Dearbornistan merely for planning a protest near a mosque. Such is the respect for free speech when Islam becomes a force in a community, usually from immigration. The pastor was also banned from being near the town's biggest mosque. But he vowed to come back.

On Friday, Rev. Jones appeared on the steps of the Dearbornistan city hall to speak against sharia and for traditional American free expression. The local peaceful Muslims had to be held back by the riot police as they broke through barricades to reach the pastor. 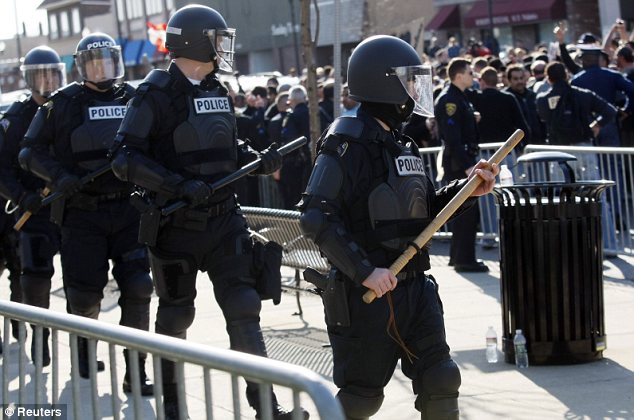 Wouldn't Muslims be happier residing in an Islamic society where people care more for guarding the Koran than living in freedom? Life in America is wasted on Muslims, seriously.

"We're glad to be back," he told reporters. "We're going to talk about a number of issues. Of course Sharia, jihad, what happened last week and we're even going to be talking about president Obama's reelection."

Counter-protesters lined Michigan Avenue across the street from City Hall. About an hour into the protest, the crowds broke the barricades and a police line. They rushed the street but were quickly contained by riot police crews.

The crowd was throwing water bottles and shoes at supporters of Jones. Police worked to push the crowd back across Michigan Avenue.

At least one arrest was made.

"We're hoping that we can have a successful event here, where he can speak and everybody behaves within the boundaries that are anticipated in the Constitution," he said. "Then, that disperses and everyone goes away safely and we move on."

After the protest and counter protest on Friday, O'Reilly said he was not surprised by the tensions in front of City Hall.

"When you challenge people's deepest held beliefs, there is going to be emotions that occur," O'Reilly said. "I always anticipated that there would be an emotional response. I think given the situation, given his failure to do one thing we asked him to do, we came out of this pretty good."

Jones said he was surprised by the reaction of the crowd on Michigan Avenue.

"I'm a little surprised, yeah," Jones said. "I know that people get very emotional, and I understand that. I have more Arab friends than American friends ... I was surprised that it got a little bit out of hand."

He said he did not expect the kind of violence that happened Friday.

"I was always taught that in America if I don't like what you say, then I have a right not to like it. But you also have a right to say it," Jones said. Local Arab-American leaders were urging the community to ignore Jones.

"We have asked our community, straightforward, not to even come to Michigan Avenue between 4 p.m. and 8 p.m.," said Osama Siblani, of the Arab American News.

Jones was arrested last Friday for failing to post a so-called "peace bond" after a jury in Dearborn determined their originally planned protest outside the Islamic Center of America would have breached the peace. He was denied a protest permit.

The Thomas More Law Center said it has already filed a "claim of appeal" on behalf of Jones and fellow pastor Wayne Sapp.

They later posted the bonds of $1 each and were released from jail.

Jones said his constitutional rights were trampled on by the city of Dearborn and the Wayne County prosecutor's office.

A burning of the Quran in March at Jones' church in Florida led to a series of violent protests in Afghanistan that killed more than a dozen people.