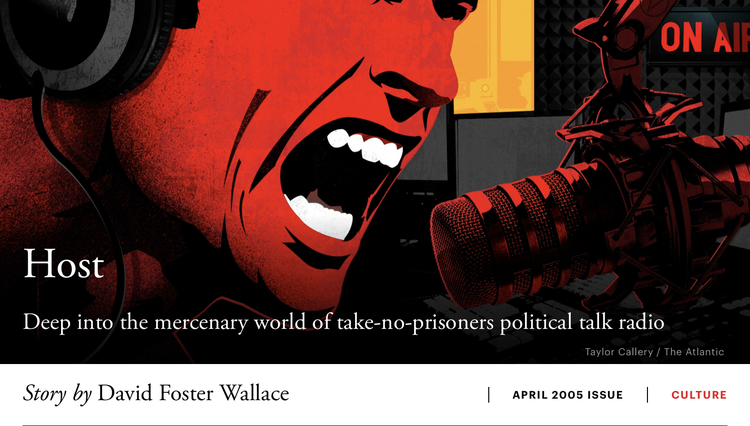 The only thing I've ever read by David Foster Wallace, a famous novelist who killed himself a couple of years ago, was his 13,800 word giganto article called "Host" in The Atlantic in 2005 about how David Foster Wallace was smarter than a minor LA talk radio host named John Ziegler.

I don't doubt that Wallace was smarter that KFI's evening talk radio host (although when Ziegler interviewed me a couple of years later, I found him quite professional and sharp). But was bizarre about DFW's vast essay were the handful of issues where he decided to draw the line between himself and the conservative talk show host, typically about race, and specifically about the guilt of O.J. Simpson. DFW wanted readers to know that the villain of the piece believed O.J. was guilty while DFW had "doubt."

If you don't believe me, here are the last two paragraphs of this endless article, in which DFW watches Ziegler watch Katie Couric interview OJ:

It's odd: if you've spent some time watching Mr. Z. perform in the studio, you can predict just what he'll look like, how his head and arms will move and eyes fill with life as he says certain things that it's all but sure he'll say on-air tonight, such as "I have some very, very strong opinions about how this interview was conducted," and "Katie Couric is a disgrace to journalism everywhere," and that O.J.'s self-presentation was "delusional and arrogant beyond all belief," and that the original trial jury was "a collection of absolute nimrods," and that to believe in Simpson's innocence, as Ms. Couric says a poll shows some 70 percent of African-Americans still do, "you have to be either crazy, deluded, or stupid-there are no other explanations."

To be fair, though, there truly are some dubious, unsettling things about the Dateline interview, such as for instance that NBC has acceded to O.J. Simpson's "no editing" condition for appearing, which used to be an utter taboo for serious news organizations. Or that O.J. gets to sit there looking cheery and unguarded even though he has his lawyer almost in his lap; or that most of Katie Couric's questions turn out to be Larry King-size fluffballs; or that O.J. Simpson responds to one of her few substantive questions-about 1994's eerie, slow-motion Bronco chase and its bearing on how O.J.'s case is still perceived-by harping on the fact that the chase "never ever, in three trials that I had, it never came up," as if that had anything to do with whatever his behavior in the Bronco really signified (and at which non-answer, and Ms. Couric's failure to press or follow up, Mr. Z. moans and smears his hand up and down over his face). Or that O.J.'s cheerful expression never changes when Katie Couric, leaning forward and speaking with a delicacy that's either decent or obscene, inquires whether his children ever ask him about the crime. And when someone in the arc of chairs around John Ziegler says, almost to himself, that the one pure thing to hope for here is that Simpson's kids believe he's innocent, Mr. Z. gives a snort of reply and states, very flatly, "They know, and he knows they know, that he did it." To which, in KFI's prep room, the best response would probably be compassion, empathy. Because one can almost feel it: what a bleak and merciless world this host lives in-believes, nay, knows for an absolute fact he lives in. I'll take doubt.

I guess all you can say is that if Johnnie and Marcia had agreed to put America's most brilliant young novelist on the OJ jury, well, he wouldn't have performed any worse (or better) than the ladies and gentlemen who acquitted the Juice.

Did Wallace write better than this, or is it all this stupid?