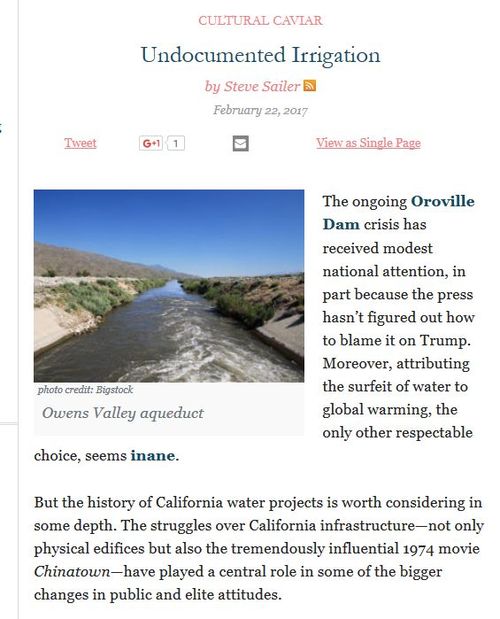 In the New York Times, David Brooks responds to, I would guess, my February 22nd Taki’s Magazine column “Undocumented Irrigation” about what we can learn about immigration policy from California’s troubled history with water projects:

A few weeks ago, Tom Cotton and David Perdue, Republican senators from Arkansas and Georgia, introduced an immigration bill that would cut the number of legal immigrants to this country each year in half, from about a million to about 500,000.

In a press conference, Cotton offered a rationale for his bill. “There’s no denying this generation-long surge in low-skilled immigration has hurt blue-collar wages,” he said. If we can reduce the number of low-skill immigrants coming into the country, that will reduce the pool of labor, put upward pressure on wages and bring more Americans back into the labor force.

It seems like a plausible argument. That is, until you actually get out in the real world.

Cotton and Perdue’s position, which is now the mainstream Republican position, is based on the unconscious supposition that American society is like a lake, with a relatively fixed boundary. If you cut the supply of fish coming from outside, there will be more food for the ones born here.

The problem is that American society is actually more like a river. Sometimes the river is running high, with a lot of volume and flow, with lots of good stuff for everybody, and sometimes it’s running low.

Let’s illustrate the point by looking at one portion of the labor market. Right now construction is booming in many cities. This has created high demand for workers and pervasive labor shortages.

Nationwide, there are now about 200,000 unfilled construction jobs, according to the National Association of Home Builders. If America were as simple as a lake, builders would just raise wages, incomes would rise and the problem would be over.

But that hasn’t happened. …

In other words, the labor shortage hasn’t led to higher wages; it’s reduced and distorted the flow of the economic river. … When builders do have workers, they focus on high-end luxury homes, leaving affordable housing high and dry.

The essential point is that immigrants don’t take native jobs on any sort of one-to-one basis. They drive economic activity all the way down the river …

For the life of me, I can’t figure out why so many Republicans prefer a dying white America to a place like, say, Houston.

Cotton and Perdue are the second coming of those static mind-set/slow-growth/zero-sum liberals one used to meet in the 1970s. They’ll dry up the river. …