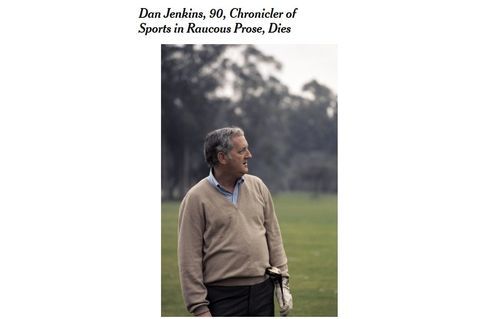 The football and golf sportswriter and novelist Dan Jenkins has died at age 89 or 90 (sources differ).

Jenkins, from Fort Worth, TX, was part of a wave of Southern and Southwestern writing talent that washed over Manhattan journalistic and literary circles in the 1960s. In one of Norman Podhoretz’s many memoirs, he remarks about how people always talked about the rise of Jewish writers, but as a magazine editor in the 1960s, what was even more evident was the rise of:

ambitious Southern writers who had come to New York and “would have been altogether unstoppable if not for the fact that,” as Podhoretz’s wife once said, “‘they always needed a beer.

Here’s Jenkins’ short memoir published in Sports Illustrated in 1965 about a young manhood spent betting on golf: “The Glory Game at Goat Hills.”