Apparently life in Cuba has not been going well in recent times, as indicated by an upsurge of northward-bound boaters 25,000 in FY 2014.

Its amazing that the ancient Cold War policy remains in place that allows fleebags to stay if they make it to land, a magnet for moochers if ever one existed. So Cubas illegal aliens keep coming, because they are rewarded with immediate amnesty if they make it to US territory under the so-called wet foot, dry foot policy.

Could it be as bad as the crime-importing Mariel Boatlift that turned Miami from a normal American city into a diverse gangster capital? Who knows? There are 11 million Cubans whose only block to the freebies of America is 90 miles of ocean. Long-distance swimmer Diana Nyad swam from Havana to Key West in 2013 but no Cuban has attempted that method.

The New York Times praised the ingenuity of recent DIY boaters although it didnt mention the clever creations of earlier exoduses. 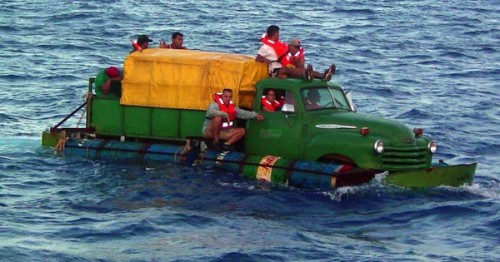 Last week, he and 21 friends from his Havana neighborhood gathered the combined know-how from their respective botched migrations and made a boat using a Toyota motor, scrap stainless steel and Styrofoam. Guided by a pocket-size Garmin GPS, they finally made it to Florida on Mr. Heredia’s ninth attempt.

“Things that were bad in Cuba are now worse,” Mr. Heredia said. “If there was more money in Cuba to pay for the trips, everyone would go.”

Mr. Heredia is one of about 25,000 Cubans who arrived by land and sea in the United States without travel visas in the fiscal year that ended on Sept. 30. He, like many others, is also an unexpected throwback to a time that experts thought had long passed: the era when Cubans boarded rickety vessels built from old car parts and inner tubes, hoping for calm seas and favorable winds. As the number of Cubans attempting the voyage nearly doubled in the past two years, the number of vessels unfit for the dangerous 90-mile crossing also climbed.

Not since the rafter crisis of 1994 has the United States received so many Cuban migrants. The increase highlights the consequences of United States immigration policy that gives preferential treatment to Cubans and recent reforms on the island that loosened travel restrictions, and it puts a harsh spotlight on the growing frustration of a post-Fidel Cuba.

More Cubans took to the sea last year than any year since 2008, when Raúl Castro officially took power and the nation hummed with anticipation. Some experts fear that the recent spike in migration could be a harbinger of a mass exodus, and they caution that the unseaworthy vessels have already left a trail of deaths.

“I believe there is a silent massive exodus,” said Ramón Saúl Sánchez, an exile leader in Miami who has helped families of those who died at sea. “We are back to those times, like in 1994, when people built little floating devices and took to the ocean, whether they had relatives here or not.”

Although the number migrating by sea hardly compares to the summer of 1994, Mr. Sánchez said the number of illegal and legal Cuban immigrants combined has now surpassed the number of those who arrived during the crisis 20 years ago.

The United States Coast Guard spotted 3,722 Cubans in the past year, almost double the number of Cubans who were intercepted in 2012. Under the migration accord signed after the 1994 crisis, those captured at sea are sent back to Cuba. Those who reach land get to stay, which the Cuban government has long argued draws many people into making the dangerous voyage.

For the past 10 years, sophisticated smuggling networks that used go-fast boats were responsible for the vast majority of Cuban migration. A crackdown by the American authorities and a lack of financing available to Cubans on the island have shifted the migration method back to what it was two decades ago, when images of desperate people aboard floating wooden planks gave Cuban migrants the “rafters” moniker.

“We have seen vessels made out of Styrofoam and some made out of inner tubes,” said Cmdr. Timothy Cronin, deputy chief of enforcement for the United States Coast Guard’s Miami District. “These vessels have no navigation equipment, no lifesaving equipment. They rarely have life jackets with them. They are really unsafe.”

About 20 percent of the vessels used in 2008 were homemade, but this past year, 87 percent of the migrants spotted at sea were riding rustic boats that the passengers had built themselves, Coast Guard statistics show.

Julio Sánchez, 38, a welder from Havana who traveled with Mr. Heredia, said most Cubans do not have the money to pay smugglers, and are instead forced to spend months gathering supplies for their journey.

“In our group, some people gave ideas, some gave money and some gave labor,” Mr. Sánchez said. The trip from a port east of Havana to an obscure Florida key cost them a total of $5,000, a fraction of the $200,000 or more that smugglers would have charged such a large group.

Experts said the recession cut the flow of financing for such journeys, because it was Miami relatives who made the payments. Many of the people arriving now — like those in Mr. Sánchez’s group — have no family in the United States to help pay.

He and 31 others departed from Manzanillo, in southern Cuba, in late August on a boat they built over the course of three months. They ran into engine trouble, and the food they brought was contaminated by a sealant they carried aboard to patch holes in the hull. They spent 24 days lost at sea.

Nine people, including a pregnant woman, died and were thrown overboard, and six more got on inner tubes and disappeared before the Mexican Navy rescued the survivors, Mr. Sánchez said. Two more died at shore. Mr. La O said he survived by drinking urine and spearing fish.

Their deaths came as the United States Coast Guard found four bodiesfloating in the water 23 miles east of Hollywood, Fla. Their relatives in Miami identified their corpses by their tattoos and scars.

Mr. La O became one of the more than 22,500 Cubans who arrived in the United States by land this past year — most of them at the southwest border. That is nearly double the number that did so in 2012.

Some of those migrants flew to Mexico and then requested entry at the Texas border. Relaxed travel rules in Cuba now allow people to exit the country more freely, a change that experts say plays a part in the surge in southwest border arrivals. Other people, like Mr. La O, made the first leg of the journey by sea to Central America or Mexico.

Ted Henken, a Cuba scholar at Baruch College in New York, said Washington should be worried about the increase in migration, because it demonstrates that Cuba’s recent economic reforms have failed to help the majority of Cubans, making the nation vulnerable to a catastrophic event.

“If some triggering event or series of events were to happen, like with the Venezuela aid or major unrest, or a hurricane, we could have another ‘balsero’ crisis or Mariel,” Mr. Henken said, using the Spanish word for “rafter.”

A spokesman for the Cuban Interests Section in Washington did not respond to a request for comment.

Michael Flanagan, the deputy chief patrol agent for the United States Border Patrol’s Miami sector, said good weather, particularly the lack of hurricanes in recent years, has played a part in facilitating travel. Although the 91 percent increase in Cuban landings was “significant and it has our attention,” he said, it was not “remarkable.”

“Even if half the people who leave from Cuba do not survive, that means half of them did,” Mr. La O said, speaking from his grandmother’s house in Miami, where he arrived last week. “I would tell anyone in Cuba to come. It’s better to die on your feet than live on your knees.”