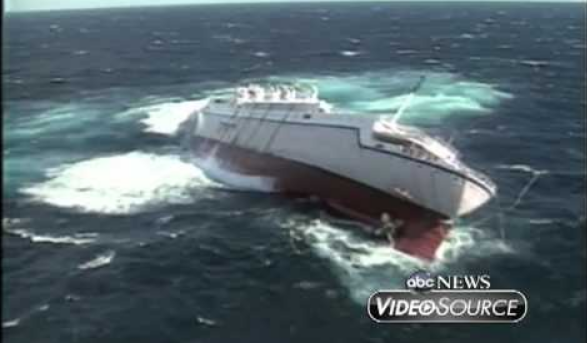 Cruise Liner Captains Don't Go Down With Their Ships

The Italian cruise ship fiasco, in which the captain is under arrest for refusing the Italian Coast Guard's demand that he return to the ship to supervise the evacuation of passengers, reminds me of a 1991 cruise ship disaster with a happy ending. From People:

On Saturday evening, Aug. 3, as a 50-mph gale buffeted their ship, passengers aboard the Greek cruise liner Oceanos gamely made their way to the main lounge for the evening's entertainment. No sooner had they settled in than the lights went out. The 492-foot ship, suddenly without power, tossed in high seas off South Africa's aptly named Wild Coast. For 361 weekend tourists, one of the most harrowing nights of their lives had just begun. The Oceanos was sinking.

Disgracefully, many of the 184 crew members clambered aboard the lifeboats ahead of some of the passengers and paddled to the safety of tankers and trawlers that had drawn nearby. At daybreak on Sunday, South African Air Force helicopters joined the rescue operation. But to the astonishment and anger of the 217 passengers still aboard, Capt. Yannis Avranias grabbed the second chopper off the ship. With no one clearly in charge, an unlikely hero emerged among the remaining crew: Robin Boltman, 31, the ship's magician.

Giving the performance of his career, Boltman entertained and calmed passengers throughout the pitch-black night. In the morning he ascended to the bridge and maintained radio contact with rescuers. Finally, at 11:30 A.M., after all other passengers and crew had been removed to safety, Boltman was lifted from the ship by a helicopter. At 1:45 P.M. the luxury liner nosed into the Indian Ocean and disappeared under the waves.

You can read the magician's story of how he organized the evacuation here.

The tradition of women and children first in shipwrecks emerged in the 19th Century. One famous example was the death of John Jacob Astor IV, the wealthiest passenger on the Titanic in 1912. According to Wikipedia:


When Second Officer Charles Lightoller arrived on A deck to finish loading Lifeboat 4, Astor helped his wife with her maid and nurse into it. Astor then asked if he might join his wife because she was in 'a delicate condition'; however, Lightoller told him that men were not to be allowed to enter until all the women and children had been loaded. Astor stood back and simply asked Lightoller for the boat number. The lifeboat was lowered at 1:55 a.m. and Astor stood alone while others tried to free the remaining collapsible boats;[1] he was last seen on the starboard bridge wing, smoking a cigarette with Jacques Futrelle. A half hour later, the ship disappeared beneath the water. Madeleine, her nurse, and her maid survived. Astor's valet, Victor Robbins, did not.


This understated but memorable incident didn't even make the 1997 movie Titanic, presumably because it didn't fit the Celtic Good v. WASP Bad and Feminist (but Hot) Women v. Male Chauvinist Pigs dynamics that James Cameron suffused the movie with. Obviously, Cameron knows a lot about what contemporary audiences want to pay to see.

One implicit question is whether there is any connection between the change in the cultural atmosphere in recent generations and the poor behavior of these two captains. And the answer is: the sample size is too small to tell.