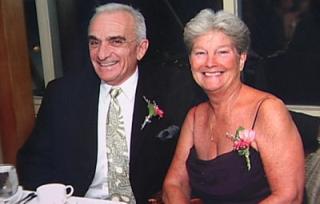 A blotto-drunk illegal alien who killed the beloved grandmother of three was sentenced to the maximum penalty in a Colorado courtroom on Monday. Barbara Barben (pictured here with her husband Paul) was crossing the street when previously arrested Alberto Alvarado-Barojas ran her down last September 19.

The perp pleaded guilty hoping for leniency, but the judge wasn't having any, noting that the man had the highest blood alcohol level she'd seen in her 12 years on the bench. He complained that his children in Mexico needed him to provide for them, as if that would excuse his crime and convince the judge to release him.

DENVER - Courtroom spectators in attendance for unrelated cases were brought to tears as Barbara Barben's family described the devastating loss caused by the driver who was so drunk he was nearly comatose behind the wheel.

Alberto Alvarado-Barojas, who is in the United States illegally, was sentenced to the maximum of 12 years in prison after pleading guilty to vehicular homicide. He is expected to be deported to Mexico upon his release.

Alvarado-Barojas had a blood alcohol level of at least .393, about five times the legal limit, when he ran a red light on Hampden Avenue and hit Barben on the morning of September 14, 2009.

Paul A. Barben, Barbara Barben's widower, said there would be no forgiveness.

"The vision that I go through daily is knowing that my wife's last moments on Earth were spent in anguish and in the indignity of being ground into the gutter by Mr. Barojas," Barben said.

Christopher Barben, the victim's son, called Alvarado-Barojas "an uninvited guest in my country" who "seems to have a flagrant disregard for the law."

Another one of Barbara Barben's sons told the judge that Alvarado-Barojas is a "thief."

"He stole the soul of my family," Paul Barben said. "He also stole a plethora of memories not yet made, memories that will never be made."