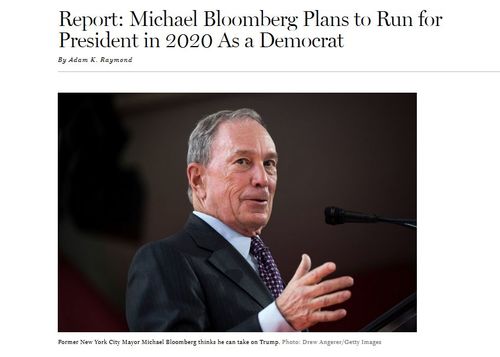 Report: Michael Bloomberg Plans to Run for President in 2020 As a Democrat
By Adam K. Raymond

Billionaire ex-New York City mayor Michael Bloomberg is planning to run for president in 2020, according to a report in the Times of London. The report says Bloomberg, who toyed with an independent run for the White House in 2008, 2012, and 2016, is going to run as a Democrat.

This isn’t the first hint that Bloomberg, who is worth $52 billion, according to Forbes, is thinking about a White House run in 2020.

Bloomberg’s thinking on the immigration topic is highly sophisticated. From UPI, April 1 [no joke], 2006:

“You and I are beneficiaries of these jobs,” Bloomberg told his WABC-AM radio co-host, John Gambling. “You and I both play golf; who takes care of the greens and the fairways in your golf course?”

There would be birdies rotting in the unmown fairways if the members of hyper-exclusive Deepdale had to pay more to their grounds crew.
[Comment at Unz.com]