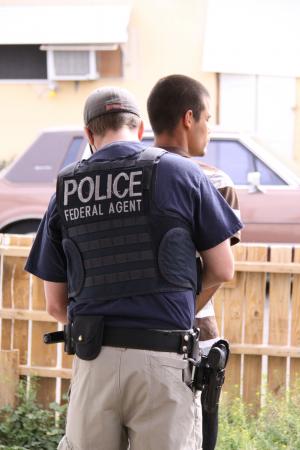 America as a nation of laws is rapidly slipping away before our eyes. Even dangerous criminals are not deported, turning the idea of public safety into a sad relic.

Those familiar with the problem of illegal alien criminals know of the cases where drunk driving illegals were not deported after their initial arrests, and went on to kill innocent Americans like Denny McCann, three-year-old Marten Kudlis, Sister Denise Mosier and many others.

Now the goalpost has been moved back considerably, with a foreign kidnapper being allowed to remain in America despite the obvious danger to the public. Not that long ago, kidnapping was considered a very serious crime. In 1960, California kidnapper Caryl Chessman was executed for kidnapping.

In what may seem like a bad joke, a U.S. federal appellate court has spared an illegal immigrant convicted of kidnapping from deportation ruling that it’s not necessarily a crime of moral turpitude.

The decision, issued this week by the famously liberal 9th Circuit Court of Appeals, rambles on for 27 pages and is almost comical. “This undoubtedly appears to be a difficult question at first glance,” it reads. “Kidnapping is a serious crime, and our instincts may be that it would meet the moral turpitude definition. Even for serious offenses, we must look to the specific elements of the statute of conviction and compare them to the definition of crimes involving moral turpitude.”

The case involves a Mexican man named Javier Castrijon-Garcia who entered the United States illegally in 1989 and incidentally has three American-born anchor babies. He has twice been convicted for driving with a suspended license (yes, California gives illegal aliens driver’s licenses) and in 1992 pleaded guilty to attempted kidnapping. He received a suspended sentence of 300 days in jail and 36 months of probation.

But the 9th circuit, the most overturned by the U.S. Supreme Court, disagrees writing in its decision that precedent dictates that “non-fraudulent crimes of moral turpitude almost always involve an intent to harm someone, the actual infliction of harm upon someone, or an action that affects a protected class of victim.” The type of “simple kidnapping” that this illegal immigrant committed doesn’t necessarily involve such evil intent and harm therefore it doesn’t constitute moral turpitude, according to the San Francisco-based court.

The ruling orders the Board of Immigration Appeals, which is part of the Justice Department, to “conduct a modified categorical analysis” of the illegal immigrant’s crime. Keep in mind that the BIA has already determined that kidnapping is a serious enough crime that merits deportation, so the court is essentially ordering it to make an exception or change the criminal code.

Over the years the 9th Circuit Court has been kind to illegal immigrants with criminal records. In separate 2010 rulings it spared an illegal alien from Mexico and a gangbanger from El Salvador—both convicted of serious crimes—from deportation.

A few years earlier the 9th Circuit reversed a lower court ruling calling for the deportation of a Mexican immigrant convicted of having sex with a minor. In that ruling, the 9th Circuit claimed that while the crime violated state law and was unwise and socially unacceptable, it wasn’t base, vile or depraved enough to warrant deportation.