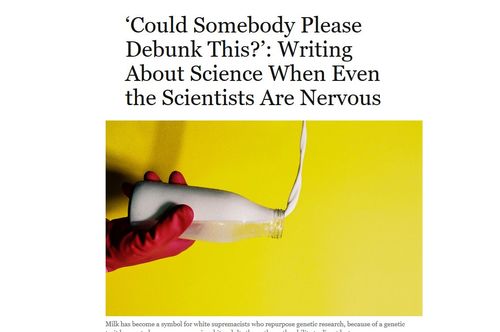 "Could Somebody Please Debunk This?"...For The Children

I was wondering whether Amy Harmon’s article in the NYT about how scientists are too reluctant to debunk “race realism” because reasons TBA was an epic troll job or sincere. Now, in the NYT Insider section, she says it was heartfelt, or headfelt. She did it For The Children:

‘Could Somebody Please Debunk This?’: Writing About Science When Even the Scientists Are Nervous

Milk has become a symbol for white supremacists who repurpose genetic research, because of a genetic trait known to be more common in white adults than others: the ability to digest lactose.

Times Insider delivers behind-the-scenes insights into how news, features and opinion come together at The New York Times.

...But the story of how he struggled last spring to find sources to refute the claims of white classmates that people of European descent had evolved to be intellectually superior to Africans is the reason I persevered in the assignment, even when I felt as if my head were going to explode.

Italics and bold mine.

… Yet all of them [scientists] agree that there is no evidence that any differences which may be found will line up with the prejudices of white supremacists....

It was hard. It did almost make my head explode.

Women writers in the NYT lately appear to be in severe physical danger of self-combustion. Perhaps tomorrow we will read:

“Upon reading the President’s latest tweet, my head erupted into a 2000 degree magnesium fire that the NYFD could not put out,

but simply had to establish a perimeter around Park Slope for the 17 hours it took my brain to burn out.”