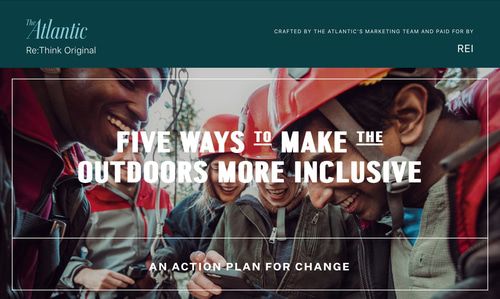 Corporate America: White People, It's Your Fault the Diverse Don't Like Camping

AN ACTION PLAN FOR CHANGE

According to the most recent National Parks Service survey, about 78 percent of those who visit federal parks are white. Meanwhile, African Americans, Latinos, women, and members of the LGBTQ community often report feeling unwelcome or unsafe in outdoor spaces. …

EVEN AFTER PARKS like Shenandoah were desegregated in the 1960s, people of color have often not felt welcome at national parks. Those feelings of unease persist today. A 2012 study titled “Why Do So Few Minority People Visit National Parks?” found that Asian Americans, African Americans, and Hispanics often feel uncomfortable when going to parks. Meanwhile, some white visitors reported discomfort when around non-white visitors.

That reminds me that many years ago in Chicago I had working for me a young Korean programmer. He was a tall, handsome guy, with a good sense of humor (as I pointed out when I wrote a recommendation for him to MBA school: I noted that they no doubt got lots of applications from Asians with high test scores, but my guy had the kind of executive personality that other people like to work for).

His bride was gorgeous, in the Oriental Dragon Princess mode. Every weekend my underling took his beautiful wife to hit golf balls at the driving range in Lincoln Park and go fishing in Wisconsin. Like I said, he was very alpha (although we didn’t have that term back then) and had that happy confidence that of course other people would want to do whatever he wanted to do, such as go to the driving range and the fishing hole.

She complained vociferously that small town white people in Wisconsin were very racist against Asians and looked at them funny when they drove through. I figured that more likely she wished her husband would take her on more urbane jaunts than fishing in Wisconsin, such as to a musical or a museum or Marshall Field’s.