In considering the Middle East, one must carefully weigh the fine points of evil, since nice guys in leadership are as common as three-headed camels. Bashar Assad may be a murdering thug who might have used chemical weapons on his own people, but at least he is not a crazed Islamist working to create a world caliphate under Allah. Assad runs a secular administration, and he has also protected Christians in his country. Trading him for a Muslim Brotherhood government would not be an improvement from an American national security viewpoint.

For an intelligently nuanced discussion of Syria, check out SunTV’s semi-regular interview of Robert Spencer by Michael Coren as they discuss a number of important subjects, including the central threat of Iran (“Syria is a sideshow”) and the clueless leadership of Obama and his sidekicks, like the clownish Senator McCain. The Arizona Senator is now a self-appointed expert on Islam, in addition his expertise on Mexican illegal aliens.

“For whatever reason, there’s no doubt he has consistently supported Sunni Islamic supremacist sharia forces. He did it in Egypt, in Libya and now in Syria, and so it may be, some people have suggested that maybe he thinks that if the Sunni Islam caliphate is restored then there will be peace, because that’s what the jihadis say they are fighting to do, so he thinks if we give that to them then they will stop fighting us. I think that is a possibility and it makes about as much sense as anything of his behavior. The consistency is clear; the reason behind it is murky.”

Michael Coren (who lived for years in the Middle East) brought up the point that Sunni Islam has its splits within, not just with the Shias in Iran, such as between the Saudis and Erdogan in Turkey. Spencer added that Obama has called Erdogan his favorite foreign leader.

“When everything he has done in his foreign policy is in favor of sharia regimes, then it seems like that’s what he wants to see in the Islamic world,” Spencer observed. (For more on this topic, see my May blog, Robert Spencer Analyzes Obama Strategy regarding Hostile Islam.)

Below, that’s President Obama’s rear end front and center, as he bowed to Saudi King Abdullah in 2009. 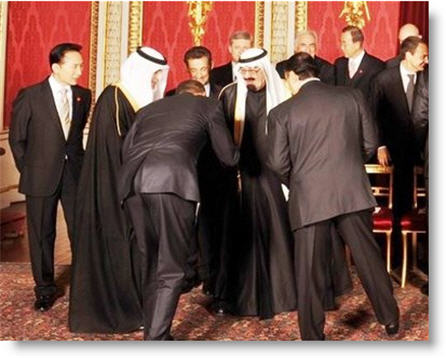