On Thursday, Fox reported an egregious immigration case in which Cook County released Salvator Sarabia (pictured), a violent burglar and convicted child sex predator who had been previously deported. Instead of holding him in jail to be picked up by ICE for deportation, the authorities released him into the community on bail, despite the obvious flight risk and danger to public safety.

Unsurprisingly, he didnt show up for his court date. 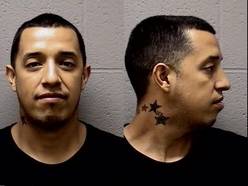 This case reflects the sort of irresponsibility that happens over and over, like the illegal alien Carlos Montano who was released and later killed a nun in a drunk driving crash. After a while, its hard to accept the repeated excuse that another criminal illegal alien fell through the cracks or it is too expensive to house them.

When child sex predators are released from police custody, obviously a more radical agenda is at work. In the video below, a hispanic-sounding county commissioner sniffs, We works for our constituents, not the federal government. Presumably his constituents wouldnt like a predator loosed on the local playground. But the commissioner apparently believes even criminal aliens are a part of la raza and must therefore be protected from American law, public safety be damned.

A convicted child sex offender and illegal immigrant who was charged with breaking into an Elgin home in June where a 13-year-old girl hid in the basement has skipped bail, according to police.

Salvador Sarabia, 28, has served time for two burglaries, drug-related charges and criminal sexual abuse of a minor and has been deported twice. He had been free after posting the required $10,000 of his $100,000 bail.

Sarabia, of the 800 block of Ford Avenue, did not show up for his court date on Nov. 21, and a warrant was issued for his arrest, according to Elgin police.

Although Sarabia had an Immigration and Naturalization Services hold against him, a Cook County ordinance passed in September allowed Sarabia to leave the Cook County jail after posting bond.

The controversial ordinance halts compliance with Immigration and Customs Enforcement detainer requests, which could have kept him behind bars for up to two days after posting to allow federal authorities time to pick him up for possible deportation.

On the orning June 27, Sarabia and 27-year-old Fidel Romero of Rockford broke the glass on the front door on a home on the 100 block of Neutrenton Avenue and made their way inside, police said.

The men left with a flat-screen TV and other items but were caught shortly after because a terrified 13-year-old girl was hiding in the basement during the break-in managed to call 911 while clutching her dog behind the basement bar, police said.

Police released the 911 tapes of the girl’s call, who stayed on the line whispering to a dispatcher until after officers had captured Sarabia and Romero.