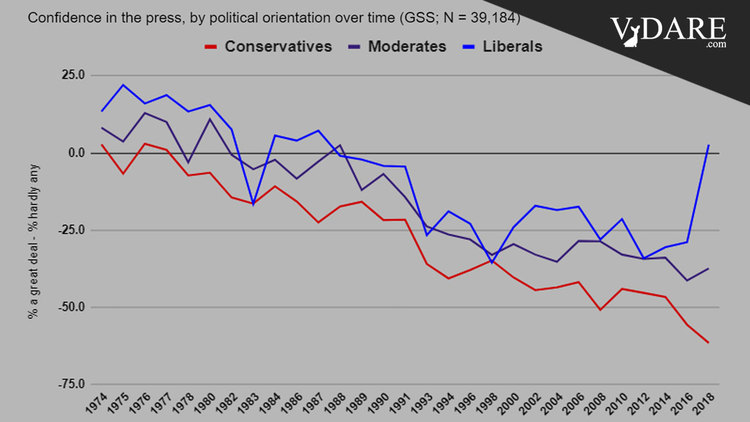 Confidence In The Press, By Political Orientation Over Time

Until Donald Trump temporarily renewed the Left’s faith in the corporate media, the integrity trajectory was down, down, down for the merchants of mendacity: The media’s ring-kissing, bootlicking deference to and running interference for the Biden administration isn’t going to sustain liberals in the same way their acrimony towards Trump did. That blue line will stay just above the surface in the 2020 data set to be released this spring, but in the subsequent iteration of the survey it will come crashing back down.

There are a lot of disheartening trends to contend with in modern America, but this is one of the good ones. Could the Iraq Attaq have happened today? Twitter and Facebook would’ve tried like hell to silence people pointing out all the absurdities and impossibilities in the claims that Saddam Hussein had weapons of mass destruction. The sieve would’ve been leaky, very leaky. Judith Miller and her colleagues at other major newspapers would try to manufacture bipartisan consent but instead of the letters editor throwing reader reactions in the trash, the journos would be brutally ratioed all across cyberspace. Maybe the warfare state could manage a few airstrikes, but a ground invasion and occupation at anything like the scope of 2003 is unthinkable now, and a big reason for that is the public’s collapsed trust of the media.