There’s not enough attention paid to how schools have become socialist propaganda centers to warp children’s and young adults’ minds into leftist mush. Even grade school kids are taught that America is evil and diversity is the highest good.

The National Center for Education Statistics informs about the current number of young people subject to K-12 public education:

In fall 2016, about 50.4 million students will attend public elementary and secondary schools. Of these, 35.4 million will be in prekindergarten through grade 8 and 15.0 million will be in grades 9 through 12. An additional 5.2 million students are expected to attend private elementary and secondary schools (source). The fall 2016 public school enrollment is expected to be slightly higher than the 50.3 million enrolled in fall 2015.

Sadly, the civic education many Americans experienced as kids is disappearing.

In its place, globalism and its values are being taught.

Below, an international flag was created for use in a New York classroom a year ago. 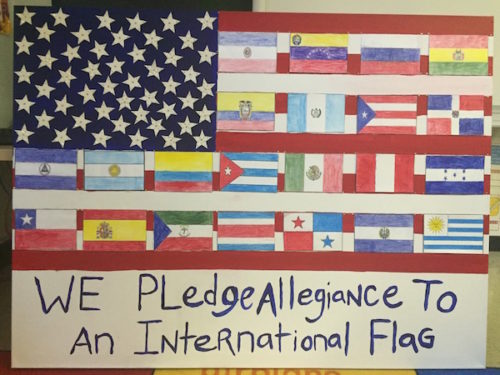 Recently, the National Associate of Scholars published a report, Making Citizens: How American Universities Teach Civics, that warned about the “New Civics” which redefines the subject as leftist political activism.

That topic was explored recently on Fox News:

BRIAN KILMEADE: Our universities and colleges around the country are turning their classrooms into cash registers by selling out and trading academics in favor of activism. You have a recent survey of over 400 universities: they found that nearly all are offering courses — it was called “new civics.” Our next guest says those courses designed to turn institutions of higher learning away from scholarships and towards left wing advocacy. Professor Frank H Buckley is a professor at George Mason University; hes at the Scalia Law School and hes the author of ”The Way Back”. Frank, first off, do you think this is organized?

FRANK H. BUCKLEY: Well its more like astroturf. Whats happening is the federal government is supporting a great deal of money into colleges that have programs that train students to be student activists, and the ultimate goal is to make this a part of every course and indeed a condition for tenure for university professors so its really a takeover of scholarship in the direction of making little community organizers out of all of our students.

KILMEADE: And when do you think this infiltration took place?

BUCKLEY: It’s happened over the last 20-odd years, I mean it certainly increased over the last eight years, lets say, but its really remarkable: its under the radar screen. Its well hidden its there, but it took an organization called the National Association of Scholars to go out and actually see what was happening and the results are shocking.

KILMEADE: So the government can have some leverage here because it provides so much money to these universities. For example UC Boulder, 25 million per year; Colorado State, 15 million per year; University of North Carolina nine million per year. So with that could come some strings. What do you think, if you want to balance things out again, should those strings contain?

BUCKLEY: I think first of all, I see absolutely no reason why we should be training people to or paying for students to do stuff which is totally unrelated to scholarship. I mean, were giving money for scholarships for students who want to learn things. Were not giving money to teach people how to occupy buildings and go out and riot on the streets. Thats not what its all about, and we shouldnt be actually paying any money for that terms of of the of college grants and in general in terms of dedicating money to universities. I think what the Trump administration should be doing is looking at how faithful they are to the mission of basically doing ordinary good scholarship. (Continues)

In addition, the Washington Times discusses the topic:

College-level civics courses have been hijacked by a progressive ideology that emphasizes instruction in organizing political movements rather than understanding the American system of government and the Western tradition upon which it is built, according to a report published this week.

“Making Citizens: How American Universities Teach Civics,” a report published by the National Association of Scholars, examines the curricula at four universities and concludes that courses aimed at understanding America have largely been replaced by vocational classes on how to transform it.

“In practice this means that instead of teaching college students the foundations of law, liberty, and self-government, colleges teach students how to organize protests, occupy buildings, and stage demonstrations,” the study says. “These are indeed forms of ‘civic engagement,’ but they are far from being a genuine substitute for learning how to be a full participant in our republic.”

The University of Colorado-Boulder, for instance, offers no specific mandatory curriculum. Instead, students fulfill graduation requirements by taking courses in 10 different areas of study — each of which includes hundreds of alternatives.

Boulder’s United States Context requirement can be completed by taking traditionally oriented civics courses such as American Political Thought or History of the United States to 1865. Or it can be fulfilled by taking Civic Engagement: Democracy as a Tool for Social Change.

Less than one-third of undergraduates at Boulder will take a class in traditional civics, the study estimates, and less than 10 percent will take a course in introductory American politics.

Although the report found 11 courses at Boulder that constituted traditional civics education, it identified 60 in a variety of disciplines that have explicit service-learning or civic engagement requirements.

“We surmise that still fewer students at CU-Boulder take two or more of the courses that comprise the traditional curriculum in civic literacy,” the report says. “The university’s policy of loose distribution requirements ensure that only a small fraction of CU-Boulder undergraduates receive a traditional civics education.”

Of the four universities examined, the University of Wyoming is the only one with something resembling a core curriculum — because of a mandate passed in 1925 by the state Legislature.

About half of the University of Wyoming undergraduates will take an introductory course on American government, and the other half will get out of the requirement by taking a multiple-choice exam.

“The requirement frames UW’s core civics education as an unpleasant obligation, to be avoided if possible — but at least the university still requires students to acquire a minimum of traditional civic knowledge,” the report says.

‘Rules for Radicals’
John Carson, a regent at the University of Colorado, said a proper civics education is indispensable for informed participation in the American system of government.

“At its roots, civics goes back to the ancient Greeks and our whole civilization through the Middle Ages right to the founding,” Mr. Carson said. “If we’re not teaching American civics in a more modern sense and what the foundation of it is, then I think we’re compromising the very purpose of the university.”

The National Association of Scholars report details how the meaning of civics education has been transformed over the past several decades by disciples of the late Saul Alinsky, the community organizer known for his 1971 book, “Rules for Radicals.”

Instead of conferring an understanding of the U.S. Constitution, American history and Western civilization upon students, progressive activists have coaxed colleges and universities into defining civics education to mean community organizing, service learning and civic engagement toward progressive ends, the report says.

The view of civics education is endorsed by, among others, President Obama’s Department of Education, which in 2012 called on “the higher education community — its constituents and stakeholders — to embrace civic learning and democratic engagement as an undisputed educational priority for all of higher education, public and private, two-year and four-year.”

“The devil is in the details,” Peter Wood, president of the National Association of Scholars, said in a statement. “Now ‘civic learning’ doesn’t mean what you would expect — straightforward things such as understanding the Bill of Rights, the three branches of government and the Electoral College. Instead, this New Civics is all about ‘diversity,’ environmentalism, the LGBT movement, ‘global’ citizenship, and other liberal causes.”

The report also shows that what happens in academia doesn’t stay in academia. Far from remaining isolated on America’s colleges and university campuses, the new civics has changed the very idea of what it means to be a citizen. That idea has expanded into a multibillion-dollar industry made up of federal and state bureaucracies, nonprofit organizations and professional advocacy groups.

“Civic engagement diverts at least $40 billion a year and 1.5 million hours of student labor toward progressive organizations,” David Randall, director of communications for the National Association of Scholars and author of the report, said in a statement. “In the meantime, colleges are failing to teach students how their government actually works.”

Ultimately, Mr. Carson said, America is imperiled by a citizenry that does not understand how its government functions or how to check its abuses of power.

“One of my favorite quotes is from President Reagan, who said, ‘Freedom is never more than one generation away from extinction,’” Mr. Carson said. “His point is we have a responsibility to teach the next generation how freedom came about, why it’s important and what needs to be done to preserve it.”