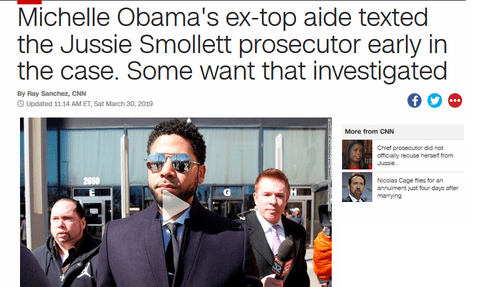 CNN: Tina Tchen Is the Kindest, Bravest, Warmest, Most Wonderful Human Being I’ve Ever Known in My Life

Getting the right person to take those sort of concerns seriously has been a hallmark of Tchen’s career, highlighted by a stint as then-first lady Michelle Obama’s chief of staff and now by her work leading a probe of workplace culture at the Southern Poverty Law Center.

In case you are wondering how to pronounce “Tchen,” commenters suggest:

“Long before Black Lives Matter, long before Time’s Up, long before #MeToo, we were aware of how difficult it is to be believed as a woman, as a gay, as a black,” Tchen’s friend, Marilyn Katz, said.

Not surprisingly, one of David Horowitz’s organizations knows all about Katz’s long career, which appears to go back to SDS rioting in Chicago during the late 1960s Days of Rage.

“Our whole lives have taught us that lesson.” …

On that same day, another person, identified by Foxx’s office as a Smollett family friend, texted the prosecutor to ask whether they could talk by phone, the records show. “Tina Tchen gave me your number,” the friend wrote.

Hours later, Foxx responded by text to the family friend, whose identity is redacted in the public records.

That’s interesting. I was under the impression that this was a member of Smollett’s big family of well-connected entertainers/leftists. But the redacted identity of this “family friend” could be interesting.

“Spoke to the superintendent earlier, he made the ask. Trying to figure out the logistics. I’ll keep you posted,” the prosecutor wrote.

“Omg this would be a huge victory,” the family friend responded.

Who uses “Omg”? Is Jussie’s influential family friend a 16 year old girl? I searched through the Twitter accounts of Kamala Harris and Michelle Obama to see if they use “Omg” but didn’t find any examples. So I must conclude that the intervening Smollett family friend is Moon Unit Zappa.

Those who know Tchen, an Ohio native and the daughter of a psychiatrist from China, point to a career marked by equity and empathy in rendering her apparently limited involvement in the Smollett case not unexpected.

“I don’t know if we’ll ever know the truth of the situation,” Katz, a Chicago public relations adviser and political activist, said of the Smollett case. “My first impression is that Tina and I — long before #MeToo — are women who worked on the anti-rape movement and changing police attitudes towards rape victims.

Besides her stint as the former first lady’s chief of staff, Tchen, a longtime Democratic activist, also worked as an assistant to former President Barack Obama and as executive director of the White House Council on Women and Girls.

“Tina always really wants to make sure that she is connecting people and making sure the work she’s doing is front and center in her life,” said Jordan Brooks, who worked for Tchen at the White House and is now managing director of the nonprofit, The United State of Women.

As leader of the Workplace Cultural Compliance practice at the legal and financial services firm Buckley, Tchen now is conducting a “top-to-bottom external review” of workplace culture at the Southern Poverty Law Center, which is reeling from allegations over its own treatment of minority and female employees.

Tchen “is someone who seeks practical solutions and … I think it’s been a consistent thing that I have seen her do in different iterations of her career,” said Fatima Goss Graves, president and CEO of National Women’s Law Center.

Noted Katz: “Nobody ever puts Tina up to anything — let’s be really clear.”Katz met Tchen when they and others in the 1980s founded the group, Cook County Democratic Women, Katz said. Members still gather to celebrate each other’s birthdays and to press their positions in the public square.

Those coequal aims, she said, reflect the kind of personal and policy priorities Tchen seems to have acted on in the Smollett case.

“If anything happened, we would call someone we knew and say, ‘I’m concerned about a friend. Can you make sure that it’s on the up-and-up?'” Katz said of the political organization. “We would call each other and say, ‘I’m worried about something. What do you think or can you help?’ — without thinking about it.”

If you can’t see that all the members of an organization with “Cook County Democratic” in the name are always on the up and up, I don’t know what’s wrong with you.