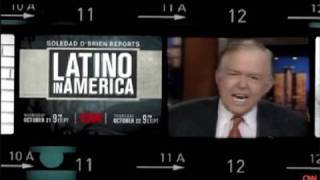 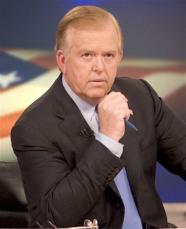 NEW YORK – CNN is airing a four-hour special on Latinos in America this week that ignores its own commentator Lou Dobbs, whose persistent advocacy against illegal immigration has angered many Hispanics.

Some activists have started an anti-Dobbs petition drive, and an advocacy group's effort to criticize Dobbs within the documentary was turned down by CNN. This week's special has left many Latinos with mixed feelings: proud that CNN talks about issues important to them but disappointed the network isn't addressing Dobbs' position head-on.[More]

They quote Roberto Lovato (robvato@gmail.com),as saying "Lou Dobbs is the gigantic anti-immigration elephant in the room at CNN," which I think is unfair. Dobbs is a little chunky, that's all. And as "elephants in the room" go, he's smaller than TWENTY MILLION ILLEGAL ALIENS!

Besides, since the Latinos In America special is unlikely to focus on

or any of the things Dobbs, VDARE.com, or the American people in general worry about, I don't see how they can fit Lou Dobbs in there. This video, courtesy of Lovatos  BastaDobbs campaign, says "CNN: Lou Dobbs or Latinos in America?" First of all, Dobbs, even in his carefully fitted suit, takes up a lot less room than TWENTY MILLION ILLEGAL ALIENS!

Besides, he was here first.