Never mind that candidate Jerry Brown pledged in 2010 not to reward lawbreaking foreigners with the precious identification document: he now presides over a diverse one-party state where he can do anything he wants. The legislature has produced a bill creating illegal alien driver’s licenses so the Governor says he will sign it.

Naturally the local propaganda rag celebrated the abrogation of law as a step forward in the liberal agenda of smashing national sovereignty and coddling diverse non-Americans: 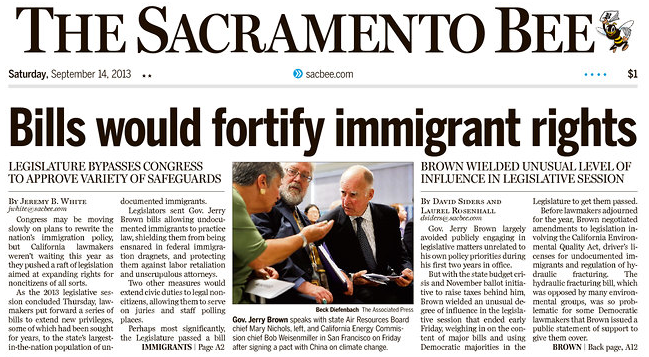 But new rights for illegal aliens prompt questions of whether they will continue to get a free ride from law enforcement, such as in Los Angeles where foreigners have faced minimal vehicle impoundment in violation of state law.

What about insurance, required from all drivers? In 2003 New Mexico enacted DLs for illegal aliens in the hope that they would become responsible vehicle operators and purchase car insurance. The experiment failed of course, and NM is consistently one of the most uninsured states.

So much for public safety and non-inflated car insurance — law-abiding Californians lose again.

SACRAMENTO — Illegal immigrants living in California will soon be able to get driver’s licenses.

Gov. Jerry Brown immediately issued a statement indicating he’ll sign it. “This bill will enable millions of people to get to work safely and legally,” he said. “Hopefully, it will send a message to Washington that immigration reform is long past due.”

Supporters from both parties said undocumented immigrants already drive in California, and roads will be safer if all drivers are trained, licensed and insured.

The bill was almost derailed by the concerns of immigration advocates that the licenses issued to illegal immigrants would be marked differently than those issued to others.

“As an American Jew, I am very sensitive to the ‘mark’ issues raised by the well-intended opponents of this measure,” state Senate President Pro Tem Darrell Steinberg, D-Sacramento, said Thursday while arguing for passage of the bill.

But while the yellow Stars of David that European Jews had to wear during the Holocaust were tools for furthering discrimination and genocide, these licenses will help end discrimination, Steinberg said.

Nine other states have similar laws, six of which were enacted this year.